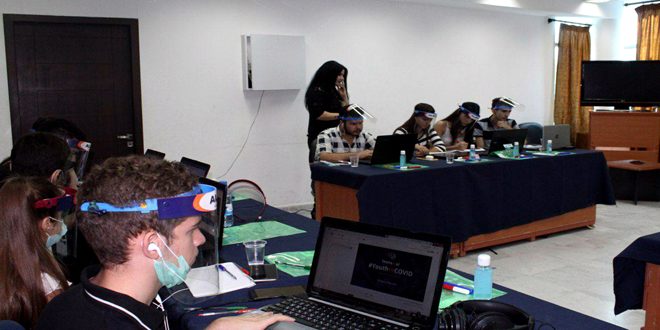 Lattakia, SANA_ The Lattakia branch of the Syrian Computer Society (SCS) has ranked first in the online competition “Ada Lovelace Hackathon 2020” for Artificial Intelligence, surpassing other teams from the United States, Britain, India, Romania and Kazakhstan.

Head of the SCS branch in Lattakia and supervisor of the contest, Maryam Fayyoud, told SANA that judges and supervisors from the Universities of Cambridge, Imperial college and the Massachusetts Institute for Technology took part in the event. Fayyoud indicated to the distinguished ideas provided by the SCS team that dealt with humanitarian and social issues including women empowerment, methods of using Artificial Intelligence technology in detecting fires and reducing their impacts, ways of evacuating a disaster area and drug addiction.

“Winning the first place inspires and encourages us to continue with our work which we have started since the idea of scientific clubs was launched with focus on children and adolescents,” Fayyoud said.

Maram Jouriyeh, a trainer, said that three teams consisting of 13 boys and girls, who are between 12 and 18 years old, as well as four supervisors, alongside 23 other teams from different countries of the world including Romania, Italy and Britain, took part in the competition that celebrates the first computer programmer in history, “Ada Lovelace”.

She hailed the high-level performance of the teams that led to winning the first place.

Ada Lovelace, the daughter of poet Lord Byron, is an English mathematician and writer and the first computer programmer for writing an algorithm for a computing machine in the mid-1800s. To honor Ada Lovelace, the 2020 competition was named after her.

2020-10-31
ghossoun
Share
Previous Algerian ambassador: Our relations with Syria have always been distinguished
Next Till End of Lifetime film..Minister Sara: media should be immortalized by cinema