Army launches large-scale military operations against terrorists across the country 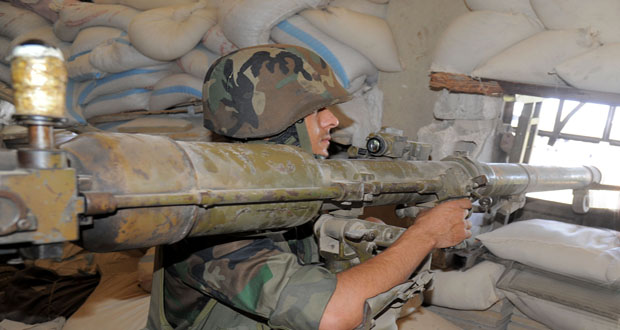 Provinces, SANA – Units of the army and the armed forces on Sunday launched wide-scale military operations against the terrorist organizations’ hideouts  and gatherings, killing scores of terrorists and wounding others.

Units of the army killed and injured a number of terrorists in al-Khazrajiyeh town in Damascus Countryside.

Units of the army killed a number of terrorists and destroyed their dens in Ibtah and Sheikh Miskeen in the countryside of the southern province of Daraa.

Units of the army and the armed forces carried out a number of operations against positions of takfiri terrorist organizations in separate areas in the countryside of the central province of Homs.

A military source told SANA that after monitoring and pursuit, an army unit destroyed gatherings of takfiri terrorist organizations in Khirbet Beit Laha in the west of Hassia town, near the Syrian-Lebanese border.

The operation resulted in the killing of many of the organizations’ members, while several others were wounded.

More terrorists were killed or injured in other army operations in Beit Rab’a village in al-Rastan in the countryside.

The source also added that an army unit eliminated a number of terrorists, injured others and destroyed their weapons and ammo in a special operation on Khatmallo village road, east of Homs city.

Units of the army and armed forces destroyed a terrorists’ vehicle while moving from Kafar Med village towards Abu sbair in Mahambal in the countryside of Idleb northern province, killing all terrorists onboard and destroying their ammunition.

Army units directed heavy blows against the dens of the Islamic State in Iraq and Syria terrorist organization, known as ISIS, in Deir Ezzor and its countryside.

SANA reporter in Deir Ezzor said army units killed ISIS terrorists and wounded others in the neighborhoods of al-Ummal, the Old Airport, al-Sina’a and Hweijet Sakr in Deir Ezzor city after they repelled their attempts yesterday to attack military checkpoints in al-Jabal area in the city, killing scores of terrorists and destroying their equipment.

The reporter added that the army’s successive strikes left numbers of terrorists killed and wounded and their weapons destroyed in al-Meri’eh village and the area surrounding it on the southern bank of the Euphrates, 10 km from Deir Ezzor city. 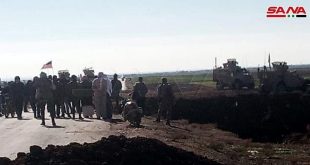