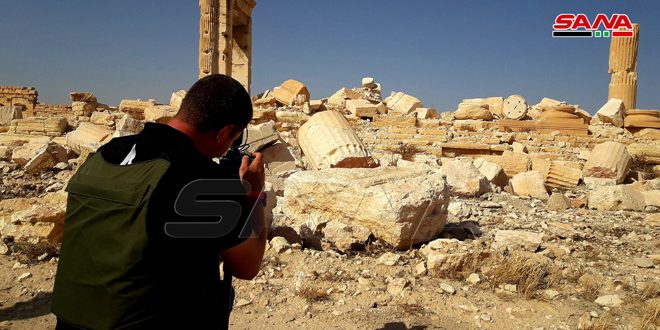 Palmyra, SANA_ The Russian state channel Zvezda TV broadcast a special television program about the ancient historic city of Palmyra, in which it documented the devastation caused to archaeological sites due to the systematic attacks of “Daesh” terrorist organization before it was defeated from the area by the Syrian Arab Army.

The documentary, which Zvezda filmed on Thursday, focused on the reality of the residential city and the return of life to normal in it after its liberation from “Daesh” by the Syrian Arab Army.

The program touched upon the life of the martyr archaeologist Khaled Asaad, who was assassinated by terrorists on August 18, 2015, after having refused to reveal the secrets and location of the ancient city’s treasures and relics.

Assistant Director of the Program, Russian Journalist Ilyana Grenovich, expressed her happiness to be in Palmyra, hailing the facilities provided by the concerned authorities for the success of the filming operations.

“It is a wonderful and beautiful thing to be in this miraculous archaeological city that amazed me with its artistic architecture, which is considered an important cultural center for all the peoples in the world,” she told SANA reporter.

Ilyana added: “On the other hand, I was very sad when I saw the archaeological monuments that “Daesh” terrorist organization had attacked, and I found no explanation for that other than the organization’s endeavor to obliterate human civilization.”

She hoped to visit the city again to see the historical monuments rebuilt and reconstructed which requires serious participation from all international archaeological organizations specialized in this field.