Lattakia’s production of grapes expected to increase by about 1,300 tons 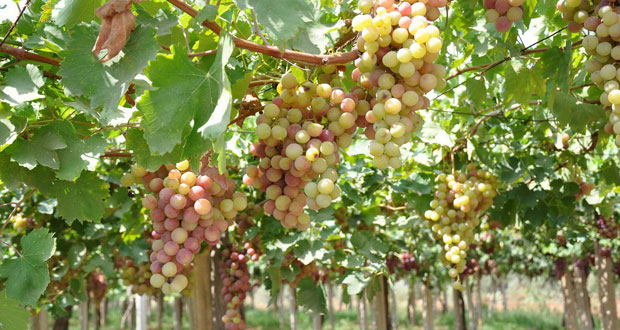 Lattakia, SANA-  According to the statistics of the current year, the areas cultivated with grape in Lattakia province have reached over then 361 hectares and they are expected to expand.

He added that the cultivation of French grapes has witnessed a remarkable turnout by the farmers due to its high economic revenues and its low cost.

Director of Plant Production Department at Lattakia Agricultural Directorate, Eng. Haitham Hajji told SANA that the total number of grape trees in Lattakia province has reached more than 397 thousand, of which 356 thousand are fruitful.

Hajji indicated that grape trees can bear the low temperatures, therefore, their cultivation has spread in the mountains in the province, adding that the production of grapes for the current year is better than the previous season as according to the preliminary estimates it will reach 7,907 tons in comparison with about 6,621 tons last year with an increase of about 1,286 tons.

300 tons Lattakia’s production of grapes expected to increase by about 1 2020-10-01
ruaa-jazaeri
Share
Previous EU should take firm stances towards Turkey, says France’s Beaune
Next Statement by Ambassador Alaa to the 45th session of the Human Rights Council