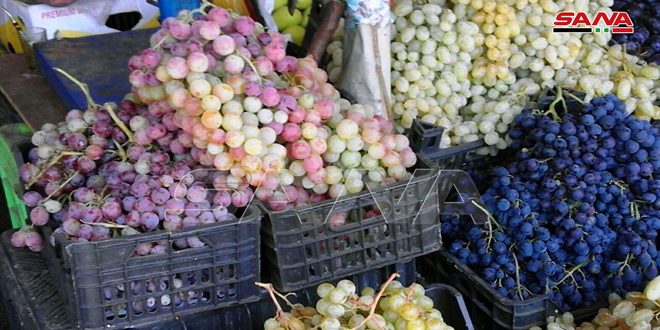 Sweida, SANA – The grape harvesting season began on Saturday in the low-lying, warmer areas located in the north and west of Sweida province and some villages of Shahba.

Director of Sweida Agriculture Department Ayham Hamed told SANA that harvesting is currently taking place within vineyards in which the crop ripens early and is marketed by farmers to local markets, and it will be manufactured and marketed to the Syrian Company for Manufacturing Grapes in the coming days.

He pointed out that the province’s grape production for the current season is estimated at about 54,360 tons while the production of the previous season was 50,959 tons.

Hamed said that grape is one of the essential crops in Sweida, and that its total cultivated area is 9,996 hectares containing around 4,760,000 plants.