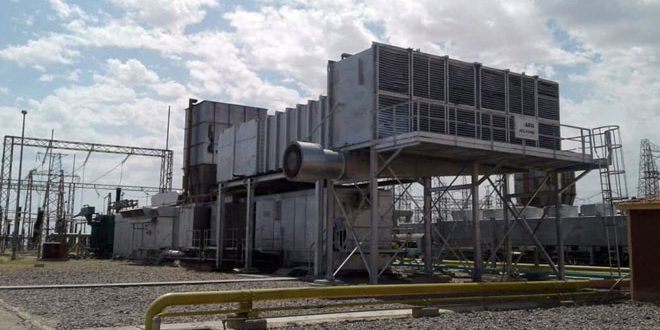 Deir Ezzor, SANA- The technical workshops at the al-Tayem plant in Deir Ezzor have completed the rehabilitation of the second gas group to generate electricity at the plant with local expertise and cadres.

General Manager of al-Tayem Power Generation Plant, Eng. Tareq al-Okleh, stated in a statement to the SANA reporter, that the employees of the plant were able to rehabilitate the second gas group for generating electricity that has been stopped since 2012 and that it has been subjected to a major damage at the hands of terrorist groups.

al-Okleh added that the work done by the technical workshops included repairing the damaged parts of the second group by transferring the similar parts from the third group and repairing the damage in it and installing and re-operating it after securing the necessary spare parts.

He pointed out that a 10.5 / 66 kV set-up transformer with a capacity of 40 MFA was secured from Qattina station and it was reinstalled, equipped and connected with the 66 kV power transfer station, and civil works were followed for the filters and coolers bases for the second group with the General Company for Building and Construction “Eastern Region Branch”, in addition to preparing a line Gas for the second group in cooperation with the Directorate of Gas Transportation in Deir Ezzor.

Deir Ezzor Rehabilitating second gas group to generate electricity at al-Tayem plant 2020-06-07
ruaa-jazaeri
Share
Previous Implementation of a sanitation project in Aleppo, at a cost SYP 65 million
Next Story of a village hiding between the mountains in Sweida countryside