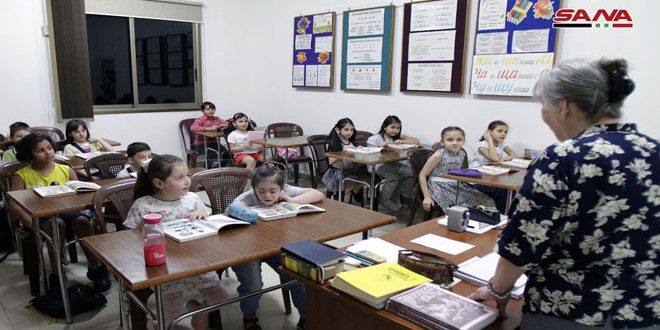 Damascus, SANA_ The Russian Cultural Center in Damascus on Sunday announced the opening of Russian language courses and the gradual return of its activities after several years of stoppage due to the terrorist war against Syria.

The Deputy Head of Mission at the Embassy of the Russian Federation in Damascus Eldar Qurbanof highlighted the strength and depth of the Russian-Syrian relations and the importance of resuming Russian language courses.

He expressed his hope that it would be a first step towards developing this educational and cultural work that contributes to strengthening relations between the two peoples and resuming the work of the center completely.

For his part, the Director of the Russian Cultural Center, Nikolai Sukhov, explained that the opening of the Russian language courses is a gradual return to the full activity of the center with taking of precautionary measures to address the Coronavirus.

He explained that there will be courses for the Russian language at various levels and for all ages, in addition to courses in music, drawing and other fields.