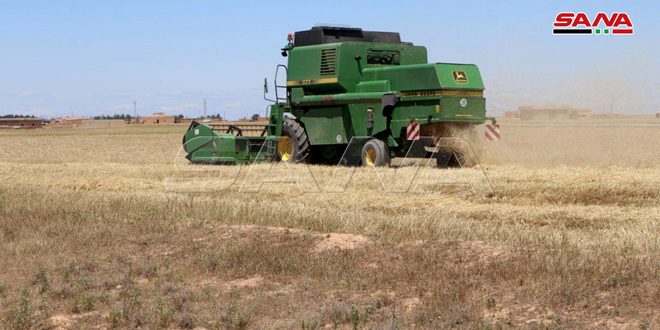 Damascus, SANA- The Syrian Grain Foundation is working to support the stability of bread production by implementing previously concluded wheat import contracts and announcing new import contracts that secure the need of mills, in addition to making all necessary preparations to market the entire wheat production for the current season.

Engineer Youssef Qassem, Director General of the Foundation, stated that all the measures that have been taken to facilitate the receipt of the entire wheat crop production from the farmers have been taken.

Qassem noted that specialized committees have started their field visits at the wheat receiving centers to overcome the difficulties in the marketing process, pointing to the keenness of the Foundation’s management and its branches to translate and implement all decisions and directions issued at the annual governmental meeting on the field status of wheat and providing all the supplies and needs required to buy and receive wheat from the peasants and producers.

He added that 49 wheat receiving centers have been prepared this season according to the safety and security conditions with an increase of 9 centers in comparison with the previous season, in addition to preparing 5 silos and 8 metal silos to store the received quantities and secure the requirements for receiving the dogma wheat in them, indicating that the return of Aleppo- Damascus International Highway will accelerate the process of transporting wheat and reduce its costs.

The government has allocated SYP 450 billion to purchase wheat during the current season. A first payment of SYP 150 billion was transferred to the account of the Syrian Grain Foundation, and the price of buying a ton of first-class wheat was set at SYP 225,000 for the current season.