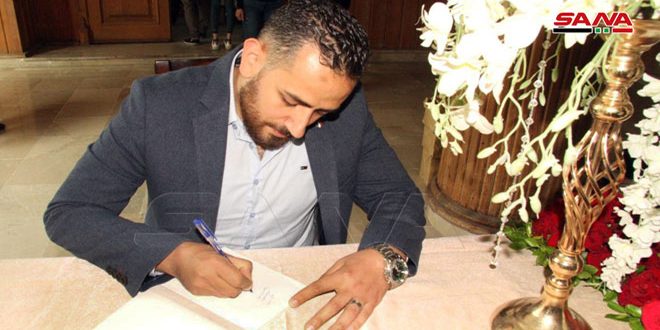 Tartous, SANA_ The wounded hero Azzam Ahmad, in his novel, “We have a life in imagination”, narrates some stories of heroism and steadfastness that he had lived through with his colleagues in the Syrian Arab Army in Raqqa city in 2013 and 2014.

Azzam, who is a civil engineer, confirmed that writing the novel was intended to convey the true image of the events at that period.

He indicated that the name of the novel came from the fact that our valiant soldiers have lived through very strange and difficult imagination, like events as they were waging the fiercest battles against the Takfiri terrorism.” 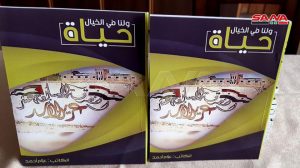 During the novel’s signature ceremony, the writer talked, through a documentary film, about the legendary steadfastness and the heroism of the Syrian Arab Army soldiers and the honorable people of Raqqa who supported the Syrian Army against the Takfiri and terrorist gangs.

The novel that Azzam took about two years to write, was presented at a signing ceremony hosted by the meeting hall in the Tartous Governorate building, where he reviewed some of the events, battles, sacrifices and memories that he lived with his companions at that stage.

The novel was printed and the inking ceremony was held within the framework of moral and financial support for the wounded heroes, so that they can be active in society, Head of Department of the Wounded in Tartous governorate, Rabie Ibrahim told SANA.

The head of the Arab Writers Union branch in Tartous Mohey El-Din Mohamed, made a critical reading in which he explained that Azzam used simple, clear language that served the narrative event and that he conveyed to us through the narration and positive words important issues that tell us a lot about the great courage of the army which we could not realize with all those details.

Author, Duha Ahmed, stressed that what we read in the novel are lines documenting the history of a country in which the spirit of belonging was rooted, considering that the writer used the language of brevity in the chapters of his novel in an attempt to reshape ideas of the novel and enter the realms of reality in a simple way.

Azzam, who had lost his sight after being shot in the head while confronting the terrorists in addition to other damage to his body, had gone through a long journey of treatment  before  he regained his eyesight.

2020-05-17
ghossoun
Share
Previous Together against Corona .. Do not neglect precautionary measures .. Simple procedures to protect you and others
Next Civil sources: US occupation plane drops thermal balloons in southern Hasaka which resulted in the burning of 200 dunums planted with wheat in Adla village, south of Shaddadi