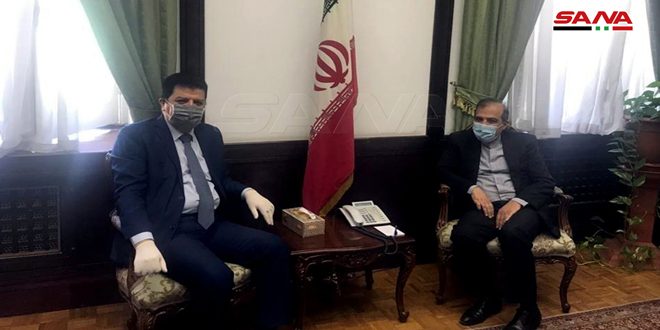 Tehran, SANA- Senior Aide of the Iranian Foreign Minister for Special Political Affairs Ali Asghar Khaji discussed on Saturday with the Syrian ambassador in Tehran, Dr. Adnan Mahmoud, the latest developments in Syria and relations between the two countries.

Asghar Khaji, according to Iranian Foreign Ministry statement, confirmed the constant “support of his country to Syria in its war against terrorism and the maintenance of a strategic cooperation between Iran, Syria and Russia in this area.”

“It is necessary to continue holding consultations and joint cooperation between Iran, Russia and Turkey within the framework of the Astana track to politically resolve the crisis in Syria,” the Iranian diplomat said.

Asghar Khaji condemned the continued unilateral coercive economic measures imposed by the United States on the Syrian people in the current difficult circumstances and the spread of Covid-19.

He emphasized the importance of the international community’s support for the people, national sovereignty and territorial integrity of Syria.

For his part, Dr. Mahmoud highlighted the strategic relations between Syria and Iran, and reaffirmed the importance of continuing coordination and consultation between the two countries at the bilateral and regional level.