Celebrations in Moscow marking 75th anniversary of victory over Nazism 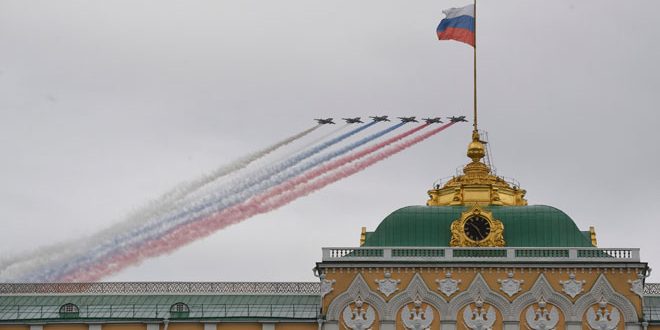 Moscow, SANA- Celebration have started on Saturday in the Russian capital city of Moscow marking the 75th anniversary of the victory over Nazism in the Great Patriotic War.

Celebrations are limited this year to the aerial show due to the outbreak of the Coronavirus, as the aerial parade will be performed in 47 Russian cities and in Russian military bases abroad.

Russia Today website quoted Russian Defense Minister Sergei Shoigu as saying that a main part of the military parade has been postponed while the aerial part of it will be performed, indicating that 75 military aircrafts and helicopters will participate in the parade through flying over the Red Square in Moscow in a single formation.

One part of this year’s Victory Day celebrations that won’t be affected by the coronavirus is the fireworks display that traditionally marks the end of celebrations.

The event of the Immortal Regiment will also be held in the form of a video and will be broadcast on the internet. Participants will be invited to go out on their balcony with pictures of their relatives who participated in the Great Patriotic War.

On May 9th of every year, Russia celebrates victory over Nazi Germany in the Great Patriotic War.