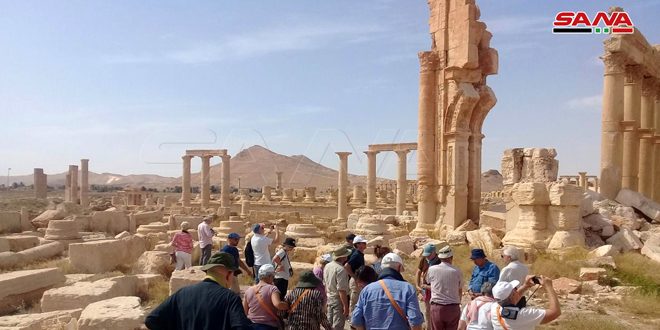 Prague, SANA- Czech T.V. affirmed that Palmyra which has been a hub linking ancient cultures is still considered as an international tourist attraction despite of all the destruction and sabotage which it has went through at the hands of terrorists.

In a reportage made by its delegate to Syria Václav Černohorský, the Czech T.V. referred to the worst period which Palmyra has went through in history when it was under the control of Daesh terrorists who practiced acts of sabotaged and destruction in the city.

It indicated that archeologists in Syria have been working and exerting all possible efforts to renovate some of the antiques which had been sabotaged in Palmyra, describing the damage inflicted on this significant archeological city as a “war crime.”

Recently, the Czech tourist website Travel Mug has published a report on Palmyra City in which it indicated that it deserves the title of “Desert Gem” for what it contains of unique antiques.

Czech T.V. says Palmyra still an international tourist attraction despite sabotage at hands of terrorists 2020-02-19
ruaa-jazaeri
Share
Previous Zarif: Combating terrorism in Idleb should continue
Next General Conference of Arab Parties: Syria’s victories in Aleppo, Idleb foiled a chapter of conspiracy against it