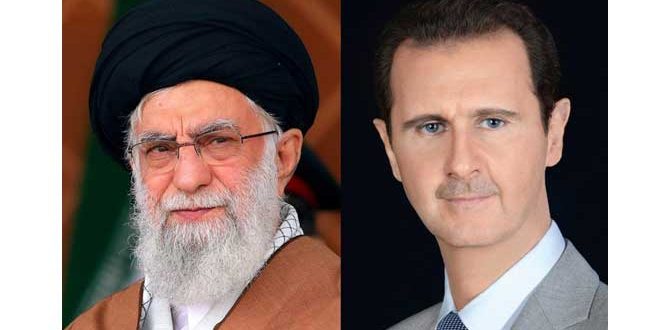 Damascus, SANA_ President Bashar al-Assad on Friday sent two cables to the Leader of Iranian Islamic Revolution Ali Khamenei and President Hassan Rouhani of Iran over the martyrdom of a constellation of resistance leaders on top of them Lieutenant General Qassem Soleimani.

President al-Assad in the cables said that this criminal act committed by the US administration reaffirms its approach of supporting terrorism, destabilizing the region and spreading chaos and law of the jungle in the service of Zionist projects and colonialism in the region and the world as a whole.

In his cable to Khamenei, President al-Assad said: “We received, with utmost sorrow, the news of the martyrdom of a constellation of resistance leaders, headed by Lt. General Qassem Soleimani, the leader of al-Quds Failaq, who spent his life in the national work and serving his country and the axis of resistance and the right issues of peoples and in combating terrorism and its backers.”

President al-Assad affirmed that the martyr Soleimani will remain immortal in the consciences of the Syrian people who will not forget his standing by the Syrian Arab Army in its defense of Syria against terrorism and its backers.

“ We are confident that this crime will increase determination of the axis of the resistance to continue confronting the US subversive policy in the region and all forces of injustice and aggression in the world,” President al-Assad said in the cable.

He stressed that the approach of the martyr Soleimani and his companions will increase determination of the resistant youth to continue this approach and build on it to strengthen and immunize the resistance in the face of the enemies of our region.

President al-Assad, on the behalf of the people of the Syrian Arab Republic and on his own behalf, extended heartfelt condolences to Khamenei and the friendly people of Iran.

In the cable to Rouhani, President al-Assad said: “ We are deeply saddened by the news of the martyrdom of a constellation of resistance leaders on top of them Lt. General Qassem Soleimani, the Leader of al-Quds Failaq, due to a US coward aggression.

President al-Assad affirmed that Soleimani’s significant contributions to the victories achieved in Syria against terrorist organizations will always remain in the consciences of the Syrian people.

“The martyrdom of those leaders, who have spent their lives in the service of the cause of resistance and the defense of truth and honor, will be a beacon that illuminates the path of whoever walked with them in this approach, and will enhance in the hearts of future generations of honorable resistants, wherever they are, the determination to do everything necessary to put an end to the aggressive policies that violate peoples ’rights and state sovereignty, which the United States has consistently pursued in our region.” The cable included.

President al-Assad underlined that the blood of the martyrs, will increase strength of the resistance axis and its determination to liberate our region from occupation and settlement.

He expressed full solidarity with the friendly people of Iran and offered sincere condolences to the families of the martyrs.