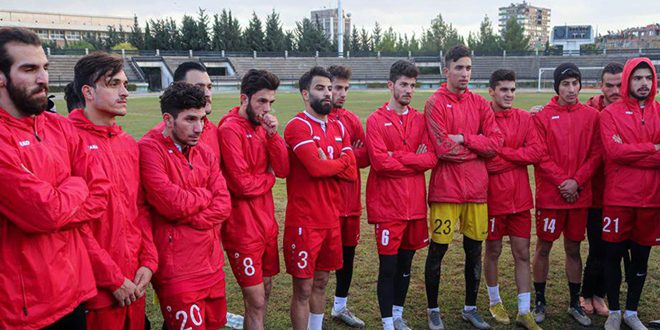 Damascus, SANA- The Syrian Olympic football team’s mission on Wednesday headed for the Thai capital, Bangkok, to participate in the AFC U-23 Championship, whose competitions will start next Wednesday.

The Syrian team will participate in the finals within the second group, as it will play its first match with the Qatari team next Thursday, and it will play matches with the Japanese and Saudi counterparts on the 12thand 15th of the current month, respectively.

It is noteworthy that the Syrian team participated in its preparations in local and foreign camps and friendly leagues as it was crowned champion of International China Friendly Tournament held last month with the participation of Tajikistan, Mali and China in addition to its participation in Dubai Football Tournament and in an external training camp in Russia.

Syrian Olympic team heads for Thailand to participate in AFC U-23 Championship 2020-01-02
ruaa-jazaeri
Share
Previous Patriarch John X on occasion of the New Year: We pray for peace in an integrated Syria
Next Syrian army finds a network of tunnels and trenches in Idleb southeastern countryside