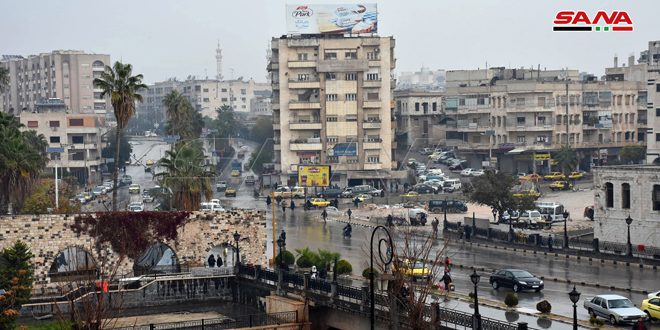 Damascus, SANA- Temperatures will drop to become around or slightly above average as the country is affected by a low air pressure in all layers of the atmosphere accompanied by a wet and cold bloc.

The Meteorology Department expected in its Thursday bulletin that the skies will be partly cloudy to cloudy and rainy, heavy rain accompanied with thunder is expected over the coastal, northwestern areas and al-Jazira, snow also expected over the high mountains.

The winds will be western to southwestern between low to moderate speed, the sea waves will be medium in amplitude.

Rain fell in a number of provinces during the past 24 hours, the rain amounts reached according to the rain bulletin issued by the Ministry of Agriculture and Agrarian Reform as 15mm in Aleppo, 11mm in Hama, 2mm in Tartous and 7mm in Lattakia.

Thursday weather 2019-12-05
hala
Share
Previous Syria participates in Meeting of RCUWM Board of Governors , Tehran
Next Rainfalls in Homs and Hama central provinces on 5/11/2019