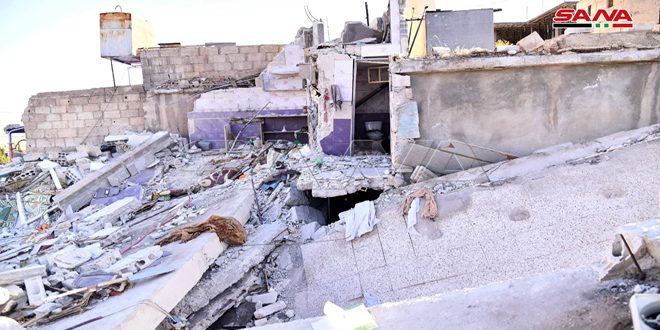 Denouncing the Israeli aggression on their country, the locals of Qudsayya Suburb told SANA that on about 1:30 at night, something hit the building and a high explosion was heard in the building and the place was filled with fire and thick smoke due to the shrapnel from a rocket.”

There were a number of martyrs and injured among the civilians due to the aggression, even though the locals affirmed that “no matter how brutal is the enemy, we will remain steadfast”.

They affirmed that the Israeli enemy is targeting the civilians due to the victories achieved by the Syrian Arab army against terrorism.

Damascus Countryside Governor Alaa Munir Ibrahim, who toured the area, told Journalists in a statement that the governorate will fix the damage affected the residential building and the cars which were in the area, in addition to providing treatment to the injured people.

Ibrahim pointed out that the technical service workshops were sent to the area to assess the damage and to immediately start the rehabilitation works.

He indicated that temporary houses will be ensured for the inhabitants of the damaged buildings till the workshops will end the rehabilitation works.

On the damage caused by the Israeli aggression against the village, Mayor of the village Mohammad al-Safadi pointed out that a rocket hit a two-story building, destroying it and claiming the lives of a man and his wife and injuring their son.

Al-Safadi added that the Israeli aggression caused huge material damage to a number of houses and markets in the village.

The locals of the village stressed that Syria will remain steadfast and will continue fighting terrorism, despite of the difficulties.

On Tuesday, the Air Defenses at the Syrian Arab Army, after midnight, foiled an intensive Israeli rocket assault that targeted the outskirts of Damascus, and destroyed most of the missiles before reaching their targets while two civilians were martyred and others were injured due to the aggression. 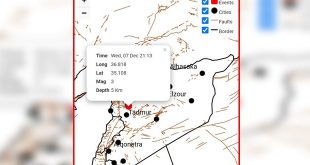