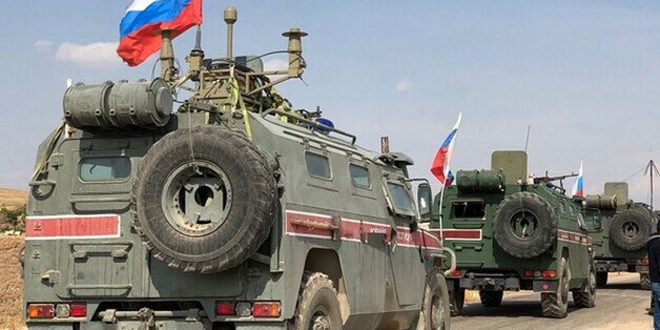 The joint patrols started their works from the border point at al-Derbasiyeh town, north of Hasaka,the Russian Ministry said in a statement, pointing out that the track of the patrols will be along 110 km as Russian and Turkish armored vehicles will move along the borders.

SANA reporter in Hasaka said that the Russian Military police imposed on the forces of the Turkish regime, before the beginning of the joint patrols, not to raise the Turkish flags on their vehicles while patrolling and to remove their digital plates of the vehicles.

Meanwhile, the Russian-Turkish joint patrols are carried out due to a memo signed by Federal Russia and the Turkish regime on 22nd of last October in Sochi city.

Last October, the Turkish regime and its mercenaries of the terrorist organizations launched an aggression  on the Syrian lands in the countryside of Hasaka and Raqqa provinces, claiming the lives of scores of civilians and displacing tens of thousands of them, in addition to causing huge material damage to the infrastructures.

joint patrols Russia Turkey 2019-11-01
hala
Share
Previous Russian Foreign Ministry: ‘White Helmets’ together with terrorists have been preparing provocations with the use of chemical weapons in Syria
Next The expanded body of Committee of Discussing Constitution continues its meetings in Geneva