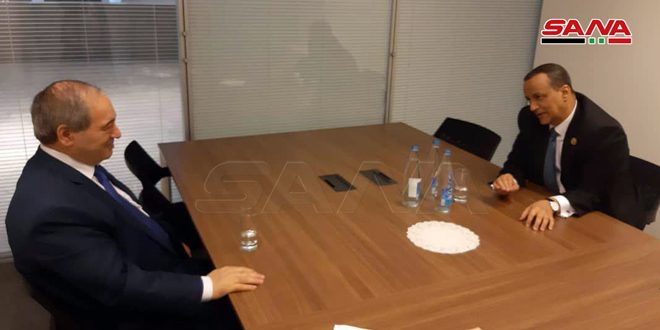 Baku, SANA- Deputy Foreign and Expatriates Minister Fayssal Mikdad continued  meetings on sidelines of the 18th Summit of Heads of State and Government of the Non-Aligned Movement (NAM) which was which concluded activities on Saturday in Baku, the capital of Azerbaijan.

Mikdad discussed with Mauritanian Foreign Minister Ismail Ould Cheikh Ahmed prospects of cooperation between the two countries and ways to develop them in different domains.

The two sides also discussed means to invigorate economic relations and to enhance investments due to the positive developments witnessed by Syria thanks to the advancement achieved by the Syrian Arab Army and the defeats which it has inflicted on the armed terrorist groups.

Mikdad expressed appreciation for the stances of the Mauritanian people which reflect the strong brotherly relations between peoples in the two brotherly countries.

The Mauritanian Foreign Minister, for his part, expressed hope that Syria will achieve more victories in the war against terrorism and will get out of its crisis soon and will return to practice its normal role regionally and internationally.

Mikdad also met Denis Moncada Colindres, Foreign Minister of Nicaragua, as talks during the meeting dealt with the conspiracies hatched against the two countries by the US and its tools in the Arab region and in Latin America.

Both sides underlined the importance of continuing coordination between the two countries to protect the gains of the two friendly peoples and to confront the attempts of imposing the US and Western hegemony on the international level.

Colindres expressed the solidarity of his country and leadership with the Syrian people and leadership, hailing the achievements realized by the Syrian Arab Army in combating terrorism and restoring security and stability to Syria.

Mikdad, for his part, affirmed the support of Syria and its leadership to the Nicaraguan people in their standing by the side of their political leadership and in defending their achievements and confronting the US attempts to interfere in their internal affairs.

The Deputy Foreign and Expatriates Minister also met Russian Deputy Foreign Minister Sergey Vershinin as the two sides discussed the currents preparations for holding the first meeting of the Committee of Discussing the Constitution, and means to overcome the obstacles imposed by some parties to hinder the work of this committee under different pretexts.

The two sides agreed that the process of reviewing the Syrian constitution will be exclusively for the Syrians and led by Syria without any foreign interference.

Talks during the meeting focused on the work of the organization, as Mikdad affirmed in this regard that “Israel” is the responsible side for not finding suitable circumstances for the regional states to join this organization as it is the only party which hasn’t joined the Nuclear Non-Proliferation Treaty (NPT) yet and it possesses all types of mass destruction weapons.