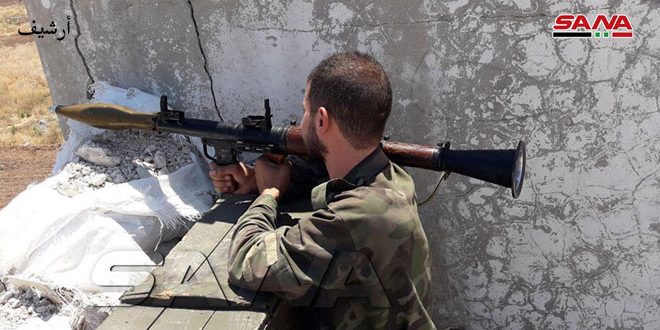 Hama, SANA – Army units on Wednesday re-established control over the villages of Tal Melh and al-Jabeen and secured them, as they continued to achieve advance in Abu Raida farms to the east of Tal Melh, killing dozens of the terrorists and destroying their weapons.

SANA reporter said that army units broadened scope of military operations in the region and targeted Jabhat al-Nusra positions at vicinity of Hasraya and al-Arbayeen.

The reporter added that army’s blows targeted the terrorists’ fortifications in the towns of al-Latamina and kafar Zeta and the village of Latmin in the northern countryside of Hama, inflicting heavy losses upon the terrorists.