US occupation, its mercenaries prevent evacuation of displaced from al-Rukban 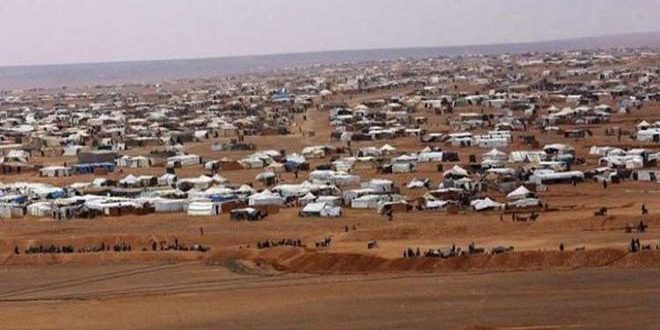 Moscow, SANA _ The Syrian-Russian Joint Coordination Committees on Repatriation of displaced Syrians confirmed that the US occupation forces, through their terrorist mercenaries,  continue to prevent the arrival of convoys to evacuate  displaced people from al-Rukban camp.

In a joint statement, the two committees again demanded the US side to secure passage of the humanitarian convoys to al-Tanf zone and protect them from US-backed ” Maghawir al-Thawra” terrorists  and to allow the Syrian Arab Red Crescent to work in the camp without hindrances.

The statement welcomed the recognition of the UN, following visits of UN High Commissioner for Refugees Filippo Grandi to Syria,  that the Syrian state bodies are working to restore the country’s economy , provide decent living conditions and employment opportunities for returning citizens, including issuing personal documents and organizing the process of providing basic services.

Preparation of places of residence by the Syrian government for the returnees was completed in Lattakia, al-Khalidiya, al-Amara, Homs, Maheen, al-Qaryatin, Tadmur(Palmyra), countryside of Damascus and Aleppo

These residence places  accommodate more than 35,000 citizens, which is exactly the same as the number of the al-Rukban camp’s residents.

The statement concluded by saying that there are comfortable buses ready to move at any time to al-Rukban camp to evacuate  up to 2,400 people to the residence places prepared and equipped by the Syrian government.