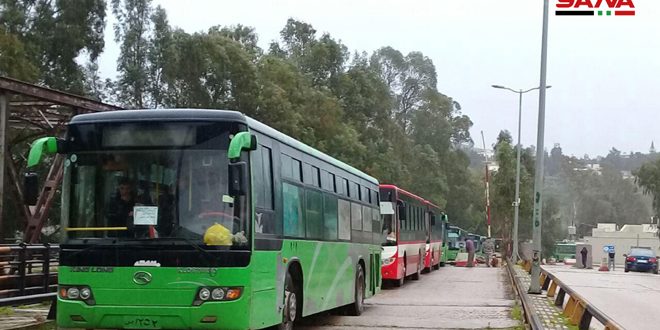 Damascus Countryside, SANA- New batches of displaced Syrians on Thursday returned from Lebanon to their villages and towns which have been liberated from terrorism through the crossings of al-Dabbousyia and Jdeidet Yabous in framework of the joint efforts exerted by the Syrian Government in cooperation with the Lebanese side for the return of all the displaced to their homeland.

SANA correspondent at al-Dabbousyia crossing in Homs western countryside said that 22 buses entered the crossing transporting hundreds of displaced Syrians on board as they were transported to their towns and villages in Homs northern countryside and the countryside of Aleppo, Hama, Deir Ezzor and Damascus.

The reporter added that cadres and teams affiliated to Homs Health Directorate provided all the required health services to the displaced who returned through al-Dabbousyia crossing, as they gave anti-polio vaccines for children and other vaccines according to their ages.

Meanwhile, SANA correspondent at Jdeidet Yabous crossing said that Syrian buses arrived in the crossing coming from the Lebanese territories with hundreds of the displaced on board to be later transported to their villages and towns after restoring the basic services to them by the authorities concerned in the province.

A number of the returnees highly appreciated the sacrifices and heroism of the Syrian Arab Army which contributed to their return to their villages and towns to be able to practice their normal life after years of displacement due to terrorism.

They referred to the measures taken by the governmental bodies to facilitate their return through providing the basic services in the areas which have been liberated from terrorism.