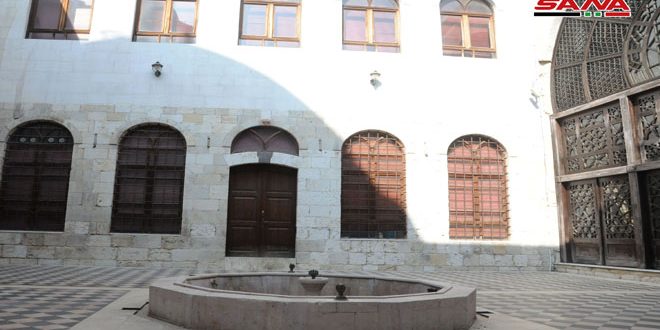 Damascus, SANA_ Az-Zahiriyah Library in Damascus is one of the most famous ancient libraries in the world. Its cultural treasures include old Arabic books, old manuscripts, documents, and hand-written letters.

The library, which is a unique architecture masterpiece in the Arab and Islamic worlds, is located in the middle of the oldest markets of old Damascus and near its historical buildings.

It took its name from its founder Al-Zaher Baibars. Building this library was his father’s idea but he died before he could achieve it.

The decorations, carvings, and writing on the building walls, in addition to the gate which bears geometric designs and patterns, make the library one of the most important buildings in Damascus.

Its ancient-fashion Damascene splendid building narrates chapters from the history of Syrian civilization with books, references and precious manuscripts, some  of which date back 1000 years, making it one of the most important Arab libraries and rare ones in the world.

Director of the library Anwar Darwish said that it was founded at the end of the 19th century by Sheikh Taher al-Jazaeri to preserve the manuscripts and the hand-written copies from damage.

Darwish added that a number of dignitaries, scholars and writers from Syria and the Arab countries, including Fakhri al-Baroudi, Khalil Mardam Bey, Muhammad Kurd Ali and many others,  dedicated their libraries to Az-Zahiriyah Library to enrich it and appreciate its role in preserving the heritage. 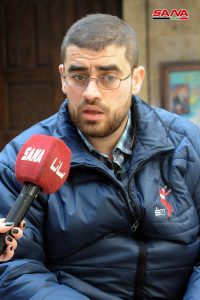 He pointed out that the first development in the library was in 1950s. In 2010 it was restored to become ready to receive and store books through a modern electronic system where thousands books were digitally indexed to serve the needs of researchers and scholars.

It contains, according to its Director, rare manuscripts and books at the level of the Arab world and the entire world; these manuscripts were moved to al-Assad National Library in Damascus since it is equipped with modern equipment that can preserve them.

The library, throughout its history, was known by many names such as Dar (house)of Arabic language books, the public library and then Dar of national books.

According to Darwish, the library contains more than 100,000 titles with 13 different languages in addition to a department of important periodicals, books’ stores and rooms for researchers vary depending on their needs.

The Library is located to the north of the Umayyad Mosque. It witnessed several  restoration stages launched in cooperation between the Syrian Arab Republic and the friendly Republic of Kazakhstan.