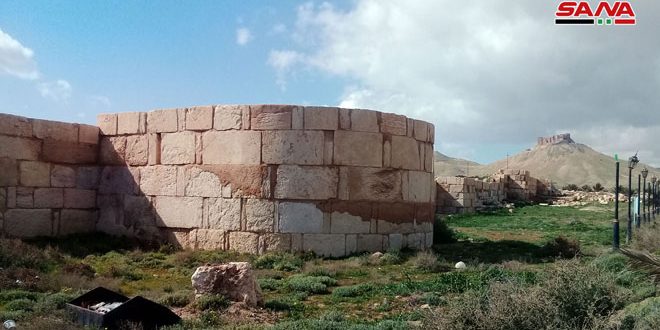 Homs, SANA- The defensive walls of Palmyra which were built by the Palmyrenes in the first century AD, are one of the most prominent archeological monuments in the city. They consist of a series of defensive fortifications that extend from the southern slope of a hill situated to the west of the city and they encircle the temple of Bel or “Baal”.

Some parts of the defensive walls were destroyed at the hands of the Roman invaders who attacked Palmyra in  272, 273 AD.

In 41 BC, the Palmyrenes decided to build a wall “customs wall” around their city to protect it from marauders and  invaders after Roman Leader Marcus Antonius invaded Palmyra city due to its richness in treasures as it was an  international trading  center on the Silk Road, Secretary of Palmyra Museum told SANA reporter.

“Nowadays, there are still some parts of the customs wall at al-Mintar Mountain, “al-Hariri added.

He indicated that after the city’s trade expanded, the Palmyrenes established a six km-long defensive wall to protect Palmyra city from the greed of its enemies. The wall was made of carved stones that have square-shaped towers with a distance between them  estimated at 37 meters that were built during the reign of King Uthaina and Queen Zenobia.

The wall was renovated several times in the era of the Roman emperors after the city had been hit by many earthquakes.

Since 1957, the Antiquities and Museums General Directorate has made excavations and rebuilt the destroyed parts of the northern walls  starting from the northern corner of the National Museum till reaching the top of the hill behind the Camp of Diocletian, a Roman military complex built in the ancient city of Palmyra.

Excavations carried out by national expeditions at the site of the walls showed that the walls consist of a 310 cm-wide double wall whose front part was built of limestone while the internal part of the wall was built of soft lime.

The walls are surrounded by a trench with a depth of five meters and they are of  8 meters width and 5- 6 meters height taking into consideration that the walls’ height was 12 meters in the past and they used to have seven doors, three on the northern wall and three others on the southern one.

2019-02-12
ruaa-jazaeri
Share
Previous  20 civilians martyred in new massacre by Int’l Coalition in Deir Ezzor countryside
Next Israeli aggression with shells and missiles on a number of sites in Quneitra, damages limited to materials 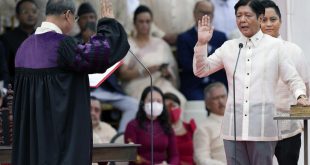