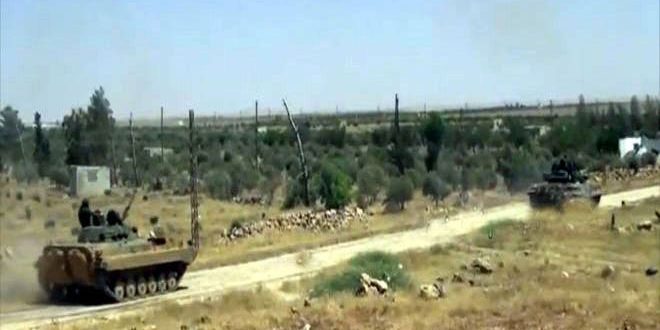 Hama, SANA_ Syrian Arab Army responded with appropriate weapons to the terrorist groups’ breaches of de-escalation zone  agreement , inflicting heavy losses upon them in personnel and equipment and destroying their fortified points in the countryside of Hama.

SANA reporter said that the army on Tuesday carried out artillery strikes on dens of terrorist groups in outskirts of Qalaat al-Madiq in response to their attacks on military points and safe areas in Hama northwestern countryside.

A number of terrorists were killed and wounded as their fortified positions were destroyed.

SANA reporter added that the army units thwarted attempt of terrorist groups to sneak  from the outskirts of al-Janabra and Tal Othman towns towards  safe areas in Hama northern countryside.

On Monday, the army destroyed dens and gatherings of terrorists in the vicinity of the villages of al-Janabra, Tal Othman, Lahaya, al-Tah, Badama and al-Najiya in the countryside of Hama and Idleb.