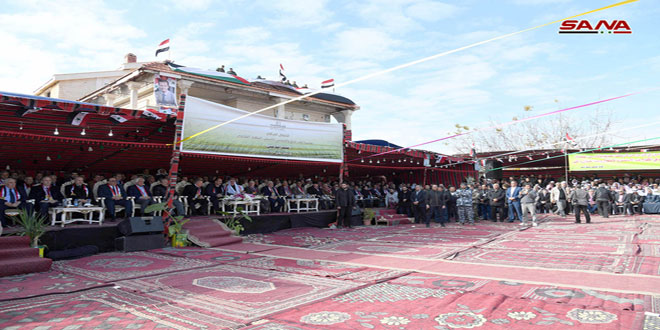 Assistant General Secretary of al-Baath Arab Socialist Party Hilal al-Hilal affirmed that the agriculture sector constitutes the cornerstone of the national economy and its production achieves self-sufficiency, and provides raw material for many food industries and contributes to the growth and progress of society.

Al-Hilal hailed the heroism of the Syrian Arab Army personnel and their determination to continue the fight against terrorism and its supporters.

Minister of Agriculture and Agrarian Reform Eng. Ahmad al-Qaderi said that all the agriculture products have been available in the markets despite of the difficulties that have faced the peasants during the terrorist war on Syria.

Al-Qaderi emphasized that the Ministry is exerting efforts to improve production, provide support for peasants and rehabilitate the agriculture sector to resume its role as before.