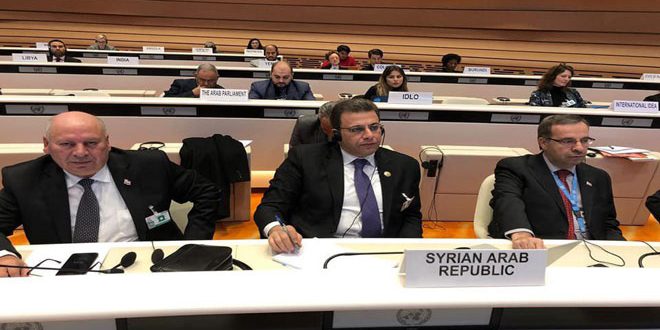 Geneva, SANA _ The United Nations Forum on Human Rights, Democracy and the Rule of Law started deliberation on Thursday at the UN headquarters in Geneva with the participation of a delegation from the Syrian People’s Assembly.

The 2nd round of the two-day forum discusses the role of parliaments as promoters of human rights, democracy and the rule of law.

During the forum, the participants, through an interactive dialogue, will discuss the three axes with the aim of strengthening the linking of democracy with both human rights and the rule of law.

Head of the Constitutional and Legislative Affairs Committee of the People’s Assembly, Ahmad Al-Kezbari, stressed the importance of the Syrian parliamentary institution and its firm role in strengthening the legislative and legal structure in Syria in the various political, economic, social and humanitarian fields.

He pointed out the need to support Syria in the process of reconstruction and recovery through demanding some governments not to negatively interfere in the Syrian political process.

Al-Kezbari urged the world countries and governments to abandon attempts to impose political conditions on Syria through which some governments seek to hinder the reconstruction process and the return of the displaced to their homes.

He stressed the need to lift the unilateral coercive economic measures imposed on the Syrian people by the governments of some countries.

The forum attended by a large number of parliamentarians from around the world as well as representatives of governments and civil society organizations.

In resolution adopted on 26 March 2015, the Human Rights Council decided to establish a forum on human rights, democracy and rule of law.  The purpose of the Forum is “to provide a platform for promoting dialogue and cooperation on issues pertaining to the relationship between these areas” and to “identify and analyze best practices, challenges and opportunities for States in their efforts to secure respect for human rights, democracy and the rule of law”.

The first meeting was attended by the Permanent Representative of Syria to the United Nations in Geneva, Ambassador Hossam El-Din Ala.