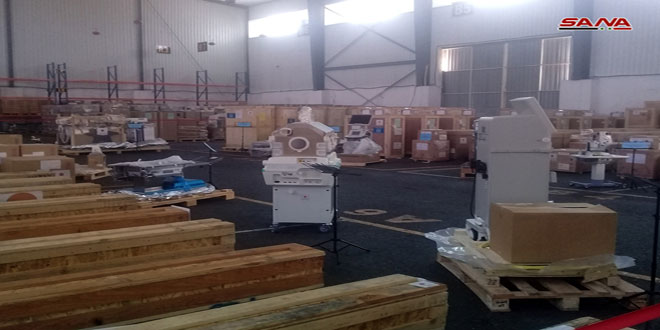 Damascus, SANA- Health and Higher Education Ministries on Thursday received from the World Health Organization (WHO) a shipment of high-tech medical equipment provided as a grant by the Japanese Government for the public hospitals affiliated to the two ministries with a value of more than USD 12 million.

WHO’s Resident Representative in Syria Elizabeth Hoff said that this shipment of medical equipment, which is provided for supporting the health sector in Syria, is the biggest of its kind regarding the value, seize and quality.

Hoff indicated that the cooperation also includes training engineers on maintaining this equipment and qualifying a number of hospitals and health centers, in addition to supplying the emergency system with a number of ambulances and mobile medical clinics.

She added that during the next week, the rehabilitation of the emergency building at the Children University Hospital in Damascus will be started with a cost of USD 2 million and over a period of 250 days.

Hoff reiterated that the WHO and its partners are committed to supporting the health sector in Syria in a way that would allow the development of the health reality and services for all the Syrians.

For his part, Higher Education Assistant Minister Hassan Jibaji hailed the continued cooperation between the WHO and the Japanese Government and the efforts they exert for providing humanitarian aid on all levels, particularly in the health domain, in addition to the logistic support through holding workshops and training courses with the aim of developing health and medical sector in Syria.

In turn, Foreign Ministry Representative Rabi Jawhara affirmed that this grant will have an important role in supporting the health sector in Syria.

Jawhara expressed appreciation for the Japanese Government and people for standing by the Syrian people   .

Head of Lattakia Health Directorate Dr. Ammar Ghannam said that the grant enhances the humanitarian solidarity among the peoples and contributes to supporting health care and alleviating the suffering of patients.