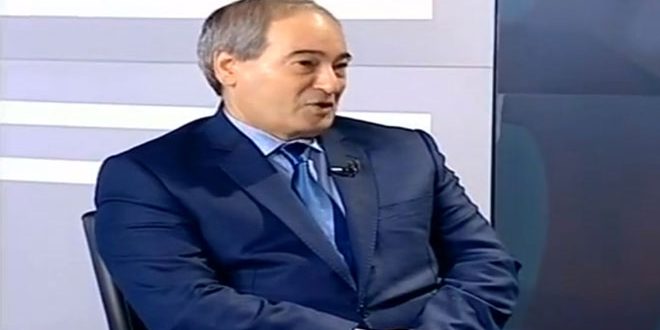 Damascus, SANA- Deputy Foreign and Expatriates Minister Dr. Fayssal Mikdad stressed that the Syrian state is determined to end the presence of terrorist organizations in Idleb province with the aim of restoring security and stability to it and freeing the besieged civilians from the clutches of these organizations.

In an interview with the Syrian TV on Friday evening, Mikdad said that the media misleading regarding Idleb is a part of hypocrisy mechanism adopted by the US and by the Western states and their tools in the region.

He indicated that Syria can’t stand still towards the suffering of two million Syrian citizens who are controlled by the terrorist organizations in Idleb, and it will liberate them from their clutches whether through local reconciliations or through a military operation.

He reiterated that the terrorist organizations of Daesh (ISIS) and Jabhat al-Nusra are not less dangerous than the Nazism which was fought by the Europeans during the World War II, and consequently whoever had fought Nazism should fight the danger of terrorist organizations in Syria and should help it ensure the security of its citizens on every inch of its territories.

He wondered how some of those states continue to support terrorist organizations through circulating their lies on the use of chemical weapons with the aim of protecting them.

Mikdad asserted that terrorists are the ones who used the chemical weapons and that the Syrian Arab Army has never used it in its operations against terrorism.

He noted that the hostile statements by the US against Syria came after Washington and its allies failed to achieve their goal in undermining Syria or ending its national and pan-Arab role and imposing the Western hegemony on the region.

Mikdad said that if the Western forces take any reckless step, Syria will retaliate and will be not be subjugated and it will practice its self-defense right which is guaranteed by all the international laws.

He added that the Western states haven’t understood yet that over eight years they haven’t been able to implement the scheme which they made against Syria which constitutes a failure to them.

Mikdad indicated that the victory achieved by Syria and its allies against terrorism has foiled all the Western attempts to impose hegemony on the world, particularly in framework of the new policies adopted by the US administration.

He said that the credibility of the UN has become in danger due to the hegemony of the Western states on the mechanisms of decision-making at the international organization.

Mikdad: Syria determined to end presence of terrorist organizations in Idleb 2018-09-01
ruaa-jazaeri
Share
Previous High-tech medical equipment granted to Syria by Japanese Government
Next Official source Foreign and Expatriates Ministry: Syria condemns in strongest terms the terrorist act which led to assassinating President of Donetsk People’s Republic Alexander Zakharchenko in a clear attempt to undermine the process of peaceful political settlement in Donbass and the implementation of Minsk agreement