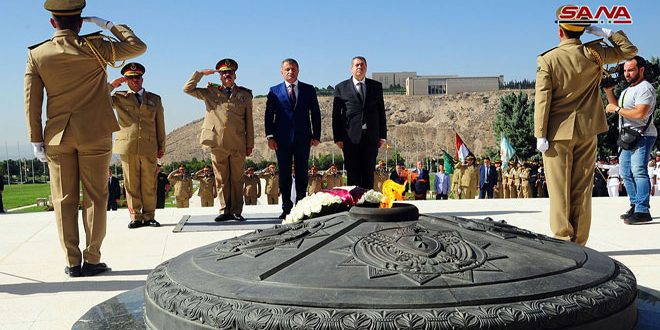 Damascus, SANA- President of South Ossetia Anatoly Bibilov visited on Tuesday the Tomb of the Unknown Soldier and a number of historical sites in the Old City of Damascus.

The President started his tour by visiting the Tomb of the Unknown Soldier on Mount Qassion and laid a wreath of roses on the mausoleum in recognition of the sacrifices of the Syrian Arab Army in the face of terrorism and wrote an entry in the record of visitors.

On Monday, President Bibilov started a three-day visit to Syria, during which he is scheduled to meet senior Syrian officials and hold talks to develop relations between the two countries.

Later, President Bibilov and his accompanying delegation visited Saidnaya in Damascus countryside and toured Our Lady of Saidnaya Monastery