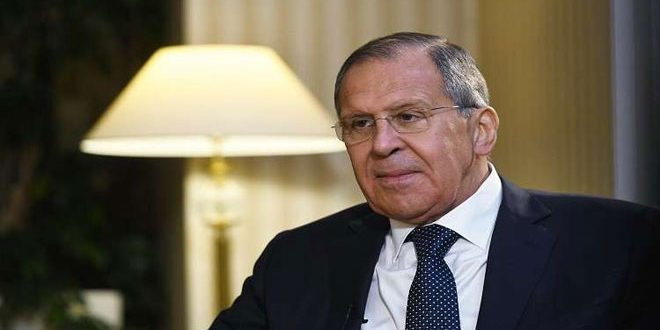 “There are foreign forces on the ground in Syria from states like the US and a number of other countries, Thus, it’s not so much of a proxy war, but rather a direct involvement in the war,” Lavrov said in an interview to the Kazakh Radio on Saturday.

The minister added “we condemn the illegitimate presence of foreign forces on the Syrian soil, the US coalition is illegitimate from the standpoint of international law and the UN Charter,”

Lavrov criticized as an “absolutely irresponsible statement” the threats by the US envoy to the UN, Nikki Haley, about Washington’s aggression on Damascus.

“ Russia has responded strongly through the representatives of Washington in Moscow and military and diplomatic channels.” Lavrov said.

The Russian diplomat considered that establishing four de-escalation zones in Syria due to Astana process contributed well in reducing violence despite the violations, emphasizing at the same time that the de-escalation of tension process could start in Eastern Ghouta when the armed groups stop firing shells on Damascus city.

He indicated that Jabhat al-Nusra terrorists are positioned in the de-escalation zones in Eastern Ghouta and thus the cessation of combat activities cannot be applicable.

Lavrov asserted the necessity of thwarting any schemes aiming at dividing Syria, noting that the US is working in this direction.

the Minister renewed Russia’s request for the UN Security Council to send a humanitarian commission to Raqqa which was destroyed by the US-led coalition claiming to fight terrorism.

“Raqqa is totally destroyed and the dead bodies on the ground have not been buried…We insist that the UNSC send an urgent humanitarian commission to the city.” Lavrov concluded.