Over 30,000 civilians leave Eastern Ghouta, army units receive them and provide their needs 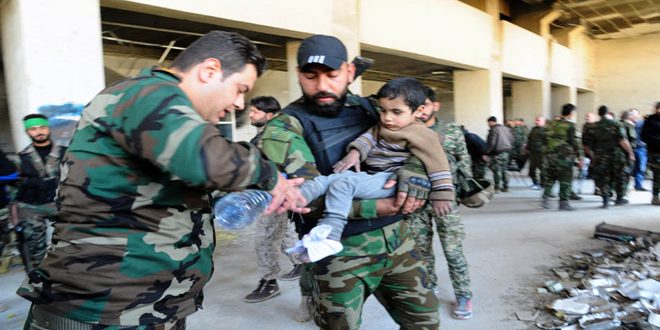 A military source told SANA that 30,000 civilians, most of them women and children, have exited Eastern
Ghouta through the safe corridors secured by the army. 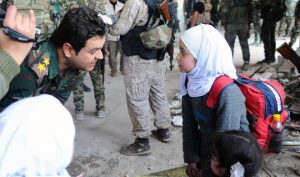 According to SANA’s reporter, terrorists opened fire on the civilians who were trying to leave Harasta towards the Water Resources corridor, injuring a girl child who was rushed by the army to a hospital.

Earlier on Saturday afternoon, the reporter said that the army, in cooperation with locals, opened a new corridor from Harasta towards the Water Resources building on the international highway, and many civilians used it to exit Ghouta.

Meanwhile, SANA’s reporter at Hammoriyeh corridor said that army units and the SARC are receiving the evacuated civilians, providing them with all necessary facilitations, and transporting them to a temporary rallying point in preparation to transporting them to temporary housing centers equipped with all necessary requirements and medical care units. 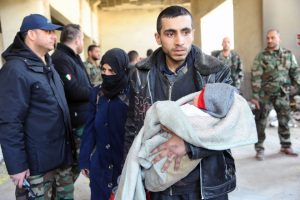 The reporter pointed out that medical personnel from the Health Ministry and the SARC are providing medical services for the critical humanitarian cases once they reach the corridor.

A number of evacuated civilians said they were confident that the Syrian Arab army is coming to rid them of the siege of terrorist organizations, calling on the rest of the people in Ghouta, especially in Douma, to stand up to terrorists.

30000 civilians Eastern Ghouta Ghouta 2018-03-17
ghossoun
Share
Previous Army advances in Ghouta towards Kafr Batna and Saqba, secures evacuation of thousands of civilians
Next Personnel from the army meet their families which have been liberated from Eastern Ghouta