After years of siege, thousands of civilians break shackles of terrorism 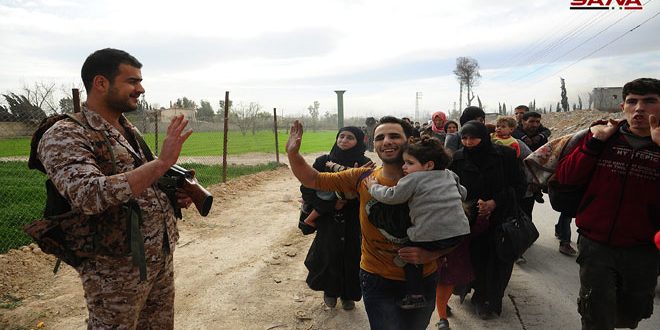 Damascus Countryside, SANA- After being hostages by the terrorist organizations for years, thousands of civilians from the towns and villages of Eastern Ghouta have been freed by the heroes of the Syrian Arab Army.

At the dawn of Thursday, thousands of Syrians who have been kidnapped by terrorist organizations for years in Eastern Ghouta decided to head for the corridors prepared and secured by the Syrian Arab Army in Hamouriya and al-Wafi 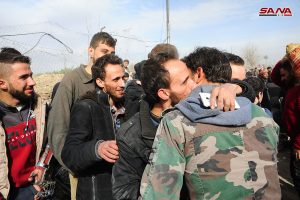 deen Camp fleeing the hell of those terrorist organizations and calling on the Army to complete the eradication of the remaining terrorism in Ghouta to liberate the families who are still under the terrorists’ control. 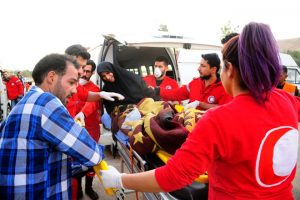 and food in preparation to transport them to the well-equipped makeshift centers in order to restore their normal life away from the intimidation and humiliation that they have been subjected to for years at by terrorists.

In parallel with securing the exit of civilians from Ghouta area, the army continued its military 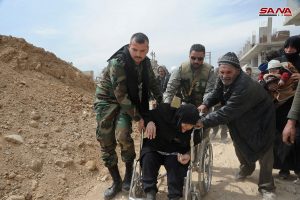 operations in the area to eradicate terrorists from it, retaking a number of farms in the northeastern of Jisreen town and a number of buildings in the east and southeastern parts of the town tightening the noose around terrorists who are besieging civilians there.

“Now we are alive. We were dead. Terrorists took everything…They humiliated us…They humiliated everything. Even the children’s food… They are terrorists of different names. They must be rooted out,” one of the evacuated civilian shouted loudly as he arrived in the safe corridor of Hamouriya.

The escapees from the hell of terrorism also talk about the terrorists’ practices against them as they summarized the tragic scene that gripped Ghouta under the influence of terrorism from the theft of food aid and depriving infants of milk and medicine not to mention the suffering of hundreds of patients.

Ghouta siege Terrorism 2018-03-16
ghossoun
Share
Previous Al-Shahba Charity Bazaar in Aleppo: Stories of resilience, creativity, and productivity
Next Foreign Ministry: Evacuation of thousands of civilians from Ghouta unveiled the false propaganda of states that shed crocodile tears for them