Al-Jaafari: Syria has taken all measures required to alleviate the suffering of civilians in al-Ghouta 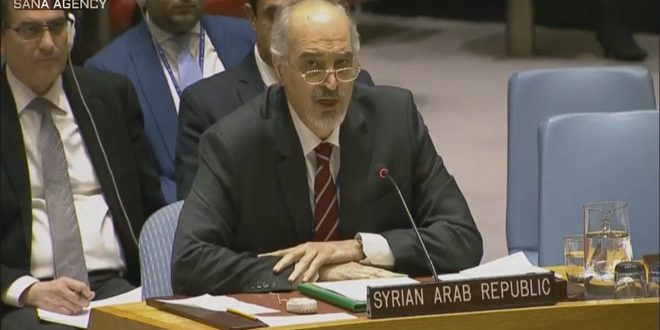 New York, SANA- Syria’s Permanent Representative to the United Nations, Bashar al-Jaafari, said that Syria has taken many measures to alleviate the suffering of civilians in al-Ghouta, including the opening of two humanitarian corridors to ensure their safe exit.

Al-Jaafari made his remarks during a UN Security Council’s meeting on the situation in Syria on Monday.

He added that after the adoption of the UNSC no. 2401, a full and daily cessation of combat activities has come into effect from 9:00 am till 2:00 pm with the aim to deliver humanitarian aid and secure a safe and unhindered evacuation of civilians in areas held by terrorist groups through two humanitarian corridors, in addition to the entry of two convoys of aid from the UN, the International Committee for Red Cross (ICRC) and the Syrian Arab Red Crescent (SARC) to the Eastern Ghouta area on the 5th and the 9th of March.

Al-Jaafari said that those measures have been impeded by terrorist groups and their operators, some of them members at the Security Council, adding that these terrorist groups have targeted civilians in the capital Damascus with more than 2499 mortar and rocket shells causing the martyrdom of 70 civilians and the injury of 556 others and prevented Syrian civilians in the Eastern Ghouta from leaving the area in order to use them as human shields and a subject of humanitarian blackmail and propaganda, not to mention opening fire at those who succeeded to head towards the corridors.

The Syrian government has also asked the General Secretariat and other humanitarian organizations to dispatch a mission to investigate the humanitarian situation in Raqqa, which was destroyed by the so-called US-led international coalition, and agreed to send aid convoys to al-Rukban camp on the condition that they should be delivered and distributed by the SARC and the ICRC not the US forces or terrorist groups situated in al-Rukban camp and al-Tanf area,” al-Jaafari added.

Two days ago, the SARC has had the government approval to send aid convoys to al-Ghouta, Raqqa, Afrin and al-Rukban which have not been sent yet due to the UN inability to provide the guarantees required to complete the mission, added al-Jaafari.

Responding to the UN Secretary-General’s statements on not possessing enough information about situation in Syria, al-Jaafari indicated that the UN Secretariat has said that it does not have information required to accurately assess the situation in Syria due to the limited presence of its staffs throughout the country despite the fact that there is a UN Office for the Coordination of Humanitarian Affairs (OCHA) in Damascus, in addition to dozens of UN agencies and 13 non-governmental organizations currently operating in Syria.

He went on to say that some of the UNSC member states have closed their embassies in Damascus and got information from what they call open sources, adding that all the information is misleading and aimed at spreading discord in the UNSC regarding the council’s role in preserving international peace and security.

He indicated that the Security Council dealt with terrorist groups, especially the terrorist “Faylaq al-Rahman” group which has been hailed by some UNSC member states and presented as a “moderate opposition”.

“As the Syrian Arab Army advances in its war on terrorism, countries that support terrorism have been launching misleading propaganda campaigns to divert attention from the aggression and terrorism Syria is confronting,” said al-Jaafari.

“We wished the UN Secretariat to provide a legal description of the so-called US-led international coalition’s practices against the civilians in Raqqa and other Syrian cities, the presence of US forces on Syrian territory without the Syrian government’s approval and occupation of parts of them and the aggression of the Turkish regime on Afrin area and measures to end this illegitimate presence and occupation,” al-Jaafari said.

He reiterated Syria’s right to defend its people, fight terrorism, confront its perpetrators and supporters, restore security and stability and rebuild what has been destroyed by terrorists in accordance with the relevant UN Security Council resolutions.

Al-Jaafari affirmed that the US Representative to the UN renewed threats that her country will take military measures against Syria if the latter used toxic chemicals just like the US Administration did when it struck al-Sh’airat Airbase last year.

He pointed out that those irresponsible and provocative statements which violate the UN Charter serve as direct provocation to terrorist groups to use chemical weapons and fabricate evidence in order to accuse the Syrian army of it.

Al-Jaafari reminded the US Representative to the UN that the previous Organization for the Prohibition of Chemical Weapons (OPCW)-United Nations Joint Investigative Mechanism refused to take samples from al-Sh’airat Airbase because if it did, the Syrian government would be proved to have no responsibility for Khan Shaikhoun chemical incident and what the US has done is considered an aggression.

Al-Jaafari called upon the US, British and French representatives to the UN to stop breaching the UNSC counterterrorism resolutions and ask their governments not to provide support to terrorist groups in Syria or cover up their ongoing crimes against the Syrian people.

“Is it not time for the US Administration to learn from its mistakes and stop repeating them relying on fabricated lies that have been condemned by the international public  opinion” wondered al-Jaafari.