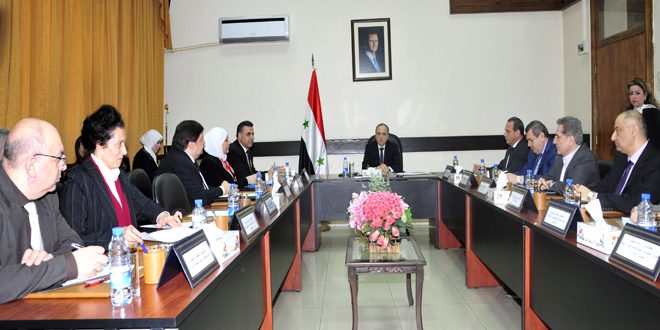 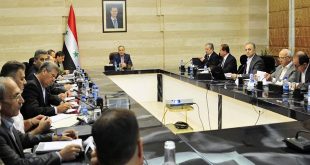 Damascus, SANA – Prime Minister Imad Khamis said that the unjust war waged on the Syrian people and its negative consequences on the progress of development process requires the setting up of a new vision to push forward the development process and overcome obstacles hindering it.

Premier Khamis was speaking to journalists following a special meeting held by the human development committee at the Education Ministry on Monday. 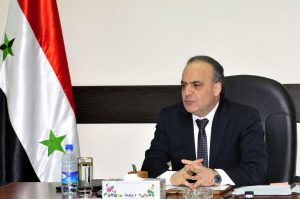 Khamis added that today’s meeting aims at developing a work mechanism to rebuild the Syrian citizens who were affected by the war and its repercussions, indicating that the government realizes the importance of building citizens who have backed Syria’s steadfastness and will have key role in rebuilding the country.

He noted that the National Project for Administrative Reform, launched by President Bashar al-Assad, Post-war Syria project and the ministries’ visions require intensifying efforts to set up an effective executive plan which, in turn, put a bigger burden of responsibility on the human development committee in order to crystalize a unified vision that suits these projects and provide an appropriate environment to have them implemented.

During the meeting, the human development committee has set up fundamental pillars for the government’s strategy to rebuild the Syrian human being and enhance his/her contribution as an active member in every aspect of life.

The strategy targets all spectrums of Syrian society and different ages as well as families, educational & cultural institutions, mass media and civil associations with the aim of creating an empowering and supportive environment, expanding social participation, strengthening social solidarity, promoting creativity, enhancing values of citizenship, co-existence and respect for others.

The participants underlined the role of human being in building a strong and coherent society which will constitute a solid foundation for building the state in the upcoming stage.

The discussions dealt with providing support to the human development committee to shoulder its responsibilities and forming a specialized work team with the aim of expanding participation to come out with effective results that contribute to the future of Syria.

The committee members submitted proposals to improve the performance of Information Ministry and enhance the role of media outlets in conveying the reality of life in Syrian cities.