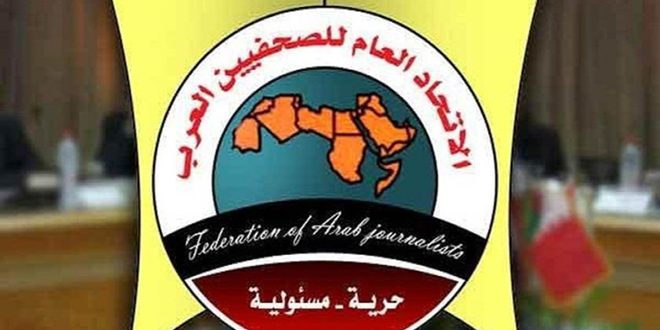 Baghdad, SANA-During a meeting held in Baghdad on Saturday, General-Secretariat of the Arab Journalists Federation decided to hold its next round in Damascus.

In a statement at the conclusion of its current round titled “al-Quds Round,” the Union called upon Arab and international media to reject US President Donald Trump’s decision on recognizing Jerusalem as the capital of the Israeli occupation’s entity.

The statement also called for focusing on al-Quds as the capital of occupied Palestine and covering all the developments in Palestine on a large-scale.

The participating delegations in the activities of “al-Quds Round” Conference hailed the distinguished participation of Syria and its pioneer role in the renaissance of the Arab nation, and the victories achieved by the Syrian Arab army against terrorism.

Chairman of the Syrian Journalists Union, Mousa Abdul Nour, underlined the importance of the participation of the Union in Arab, regional and international forums, saying that “It aims to propose issues in which the Syrian media is interested and to disclose the falsification and misleading by some media outlets, and what Syria has been facing of a media war over the past seven years.”

“We also extend congratulations to the Syrian and Iraqi armies for the victories they have achieved in their fierce battle against Daesh (ISIS) all the other terrorist organizations,” al-Lami added.