The end of Iraq’ war against Daesh terrorists declared 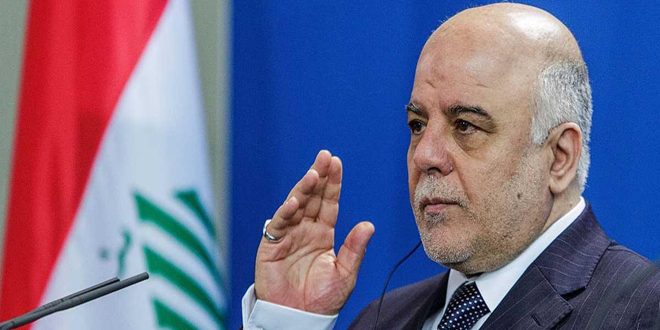 Baghdad, SANA_ Iraq declared Saturday the liberation of all Iraqi lands from Daesh (ISIS) after seizing the whole border areas between Iraq and Syria.

Iraqi Prime Minister, Haider Al-Abadi , has announced the end of many years war by Iraqi forces to drive Daesh terrorists out of the country.

“Our forces are in complete control of the Iraqi-Syrian border and I therefore announce the end of the war against Daesh ,” Abadi said in a speech at the International Media Conference in Baghdad.

“Our enemy wanted to kill our civilization, but we have won through our unity and our determination. We have triumphed in little time,” he said.

Daesh seized vast areas north and west of Baghdad in a lightning offensive in 2014, endangering the very existence of the Iraqi state.

“I announce the good news: the liberation by Iraqi forces of the whole of the Iraqi-Syrian border,” the prime minister said.