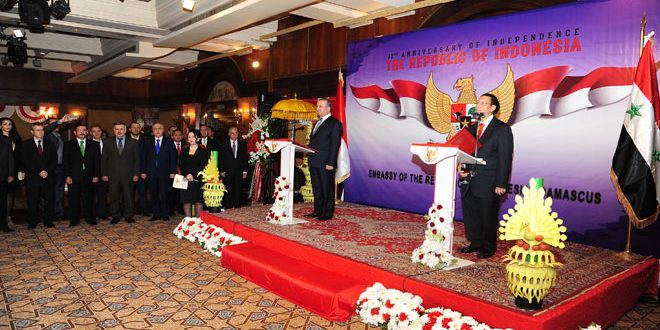 Damascus, SANA – The Indonesian Embassy in Damascus organized on Saturday a reception at the Sheraton Hotel marking the 72nd Indonesian National Day. At the reception, Indonesian Ambassador to Syria Djoko Harjanto wished prosperity and success for Syria’s people and leadership, and in statements to journalists later on he asserted his country’s support for Syria’s sovereignty and unity.

Harjanto stressed the need to enhance economic relations between the two countries, as well as improving trade exchange, adding that Indonesia wishes to participate in the reconstruction stage in Syria.

The reception, which included dance performances from Indonesian folklore, was attended by Local Administration Minister Hussein Makhlouf, Electricity Minister Mohammad Zuheir Kharboutli, and Water Resources Minister Nabil al-Hassan, in addition to a number of department heads at the Foreign and Expatriates Ministry, ambassadors, and religious and economic figures.