Marathon in Damascus to raise awareness on breast cancer 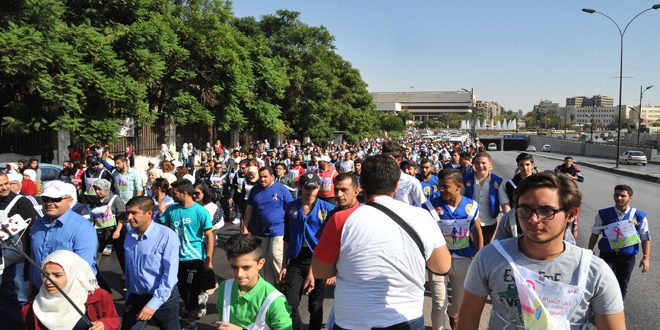 Damascus, SANA- A marathon was launched from the Umayyad Square in Damascus on Friday to raise awareness about the early detection of breast cancer.

The marathon is organized by the Ministry of Health, in cooperation with civil and youth initiatives, within its campaign for the month of October.
The marathon will reach al-Jalaa Sports City where participants will join artistic, entertaining and educational performances organized by volunteer teams and local events.

Earlier this month, the Ministry of Health launched a national campaign which included free clinical and radiological examinations in health centers and hospitals for women, in addition to lectures and seminars in cooperation with various community events.

The Ministry of Health provides free mammogram screening at 33 health centers and hospitals in 10 provinces and recommends it done every two years for women over 40 or with a family history of breast cancer.

In October, several countries around the world go pink to remind women of early detection of the breast cancer which is considered as the most common type of cancer among women and the fifth most common cause of death with about 1.7 million new diagnosed cases annually and 571,000 deaths according to the latest global statistics.

According to the World Cancer Research Fund, the survival rates among women with breast cancer have generally improved, although they vary from country to another due to early detection rates, access to appropriate medical care, and improved treatment strategies.