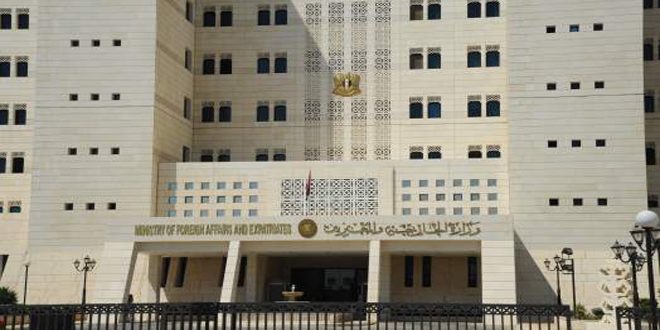 Damascus, SANA – Syria rejected the report of the UN and the Organization for the Prohibition of Chemical Weapons (OPCW) Joint Investigative Mechanism (JIM), which was announced yesterday, stressing that it came in implementation of the instructions of the US administration and Western countries to exert more political pressures and threats to Syria’s sovereignty.

A source at Foreign and Expatriates Ministry said Friday that Syria reiterates its complete commitment to the Convention of Prohibition of Chemical Weapons and that it no longer has any toxic chemicals banned in accordance with the Convention.

Syria, the ministry said, considers the use of chemical weapons an immoral and condemnable act anywhere, at any time, and under any circumstances.

The ministry’s source added that Syria strongly condemns the direct and indirect accusations against it which were included in this report and the previous one since they represent a falsification of the truth and distortion of all accurate information about what happened in Khan Sheikhon.

Syria also condemns the dependence of the Joint Investigative Mechanism on the statements of criminals who committed this immoral act in Khan Sheikhon and suspicious witnesses in addition to what they call open sources, the source said.

The source said that since the establishment of this mechanism, Syria has repeatedly expressed that the Joint Investigative Mechanism needs to carry out its work in a professional and impartial manner and that if its reports were prepared in advance by the Western intelligence services then its work would be ineffective, noting that the manner of its investigative procedures showed the dominance of Western countries over it.

The source asserted that Syria has cooperated with the UN-OPCW mechanism and did not delay or hesitate to work with them in various fields, including providing accurate information required to show the fact that the terrorist parties had used chemical weapons directly and indirectly and are supported by parties in the region and beyond, particularly the US, France, and Britain, and their tools in the region such as Saudi Arabia, Qatar, Turkey, and other countries.

The source pointed out to the fact that the pressure exerted by these countries on the joint investigative mechanism and on the fact-finding committee formed by the OPCW is that the executive council of OPCW rejected a draft resolution submitted by Russia and Iran on the necessity of sending investigation committees to Khan Shaikhoun and al-Shairat airbase by voting against this resolution.

The source said that the investigative mechanism and the fact-finding committee refused to go to the scene of the incident in Khan Shaikhoun to find out what happened on the ground, using unacceptable excuses to justify this refusal, which the JIM report did not hide as a result of Western pressure on them.