Chinese Ambassador: We support Syria in its war against terrorism 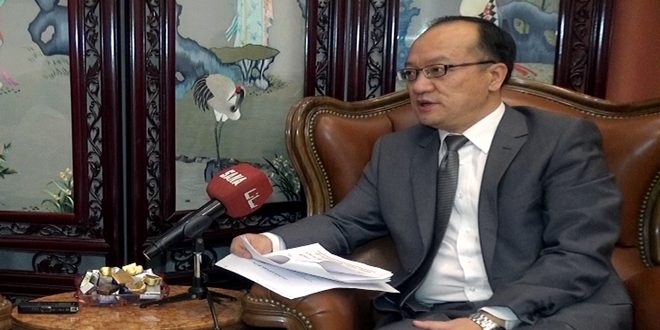 Damascus, SANA- China’s Ambassador to Syria Qi Qianjin reiterated his country’s support to Syria in its war against terrorism, standing by Syria sovereignty, independence and territorial integrity and rejecting any attempt to divide it.

The Ambassador, on the 68th anniversary of China’s national day, and the 61st anniversary of establishing the diplomatic relations between Syria and China, said on Saturday that only the Syrian people have the right of determine their future by themselves, not any other country.

The bilateral relations between the two countries continued during the years of the crisis in Syria without stop as these relations have witnessed a remarkable development, particularly during the current year, he said.

The Chinese diplomat expressed high appreciation over the wise policy adopted by the Syrian Government in heading towards the east, affirming that his country’s government will cooperate with Syria for developing mutual ties in the political, economic, educational and strategic domains.

On the economic and trade relations between the two countries, the Chinese Ambassador said that Syria is an important commercial partner of his country as it imports most of its goods from China.

The Ambassador pointed out that the Chinese people stand by the Syrian people in their dilemma and highly appreciate their sacrifices, therefore China has offered during the past years humanitarian aid to them.

He concluded by saying that a new agreement was reached during the current year on providing new humanitarian and economic assistance to the Syrian people, including rice and some electrical equipment.

Chinese Ambassador: We support Syria in its war against terrorism 2017-09-30
hala
Share
Previous Minister of Tourism inspects the work at Damascus International Airport and the tourist sector at Sayyeda Zainab town in Damascus Countryside
Next Lebanese resistance cameraman killed in Homs countryside 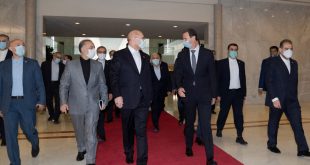