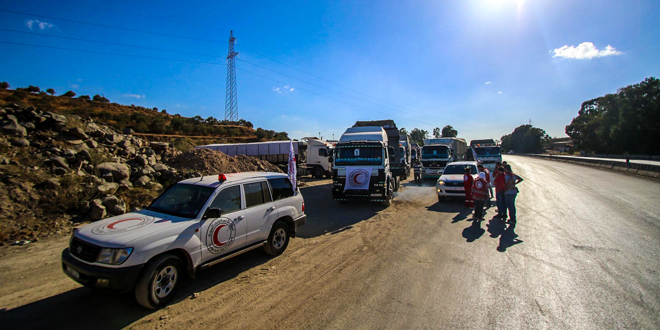 Damascus, SANA- After the Syrian Arab Army broke the siege imposed by ISIS on the city of Deir Ezzor, the Syrian Arab Red Crescent (SARC) managed on Friday to deliver its first humanitarian aid convoy by land to the city.

In a statement, the SARC said that the convoy includes food substances, health baskets, and medicines provided by the International Federation of Red Cross and Red Crescent Societies (IFRC), adding that the convoy consists of 35 trucks in addition to 7 other trucks provided by the International Committee of the Red Cross (ICRC) which include supplementary canned food substances, and the number of beneficiaries of the convoy is estimated at about 80,000 person for one month.

The statement added that these trucks are the first time SARC’s land convoys reached Deir Ezzor for more than three years, the period during which the city of Deir Ezzor suffered a severe siege which was imposed by ISIS terrorist organization, noting that the SARC will work in the coming days to meet the needs of the people in Deir Ezzor through its volunteers in the city.

The SARC and the World Food Program (WFP) managed during the past 17 months to carry out 308 air drop operations to deliver 10,000 tons of relief aid to the city of Deir Ezzor, in addition to more than 7 million packages of bread with support from the ICRC which were distributed daily and throughout a whole year by the SARC in Deir Ezzor.