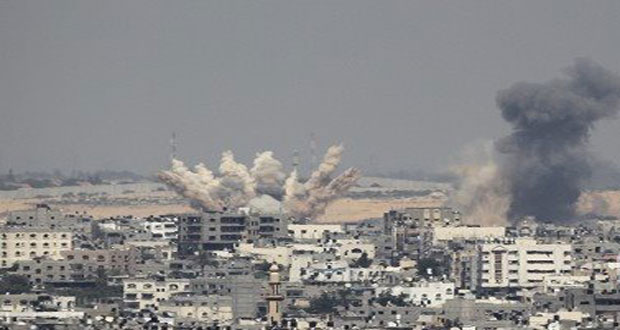 Gaza , SANA –Seven Palestinians, among them three children, were killed on Sunday in an Israeli shelling on civilian houses in Gaza Strip, raising the number of today’s martyrs into 13.

A medical source in Gaza said five Palestinians were killed in an Israeli raid on the house of Jouda family in Tal al-Zaatar to the north of the Strip.

Mohammad al-Luka, 21, was killed in another Israeli raid while he was driving his motorcycle in al-Atatra, and Mohammad Tala’at al-Ghoul was also killed in a third Israeli raid on a civilian car.

Earlier, the Israeli brutal aggression on Gaza Strip killed two Palestinians in airstrikes launched by Israeli warplanes against several areas in the Strip.

2,103 Palestinians have been killed since the beginning of the Israeli brutal aggression on the Strip, while more than 10,500 have been wounded, in addition to the huge destruction in the houses and the infrastructure.