Wide condemnation of terrorist attack on Kefraya and al-Fouaa locals 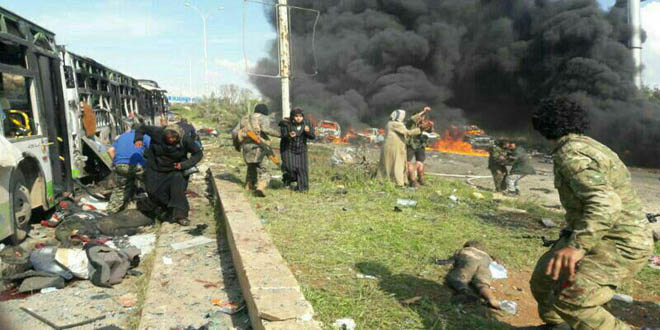 Capitals, SANA- Iranian Foreign Ministry spokesman Bahram Qasimi strongly condemned the terrorist crime committed by the Takfiri terrorist organizations against the locals of al-Fouaa and Kefraya, expressing deep condolences to the Syrian government and people and to the families of the martyrs and the injured.

In a statement on Saturday, Qasimi said that the heinous crime committed by the Takfiri terrorists in their attack against the buses which were transporting locals of al-Fouaa and Kefraya is a new stigma on the terrorists and their backers.

“The main question for the public opinion and the clear consciences is how those who claim that they support the Syrian people keep silent regarding this crime and they don’t utter a word?,” Qasimi wondered.

He clarified that the double standard policy in dealing with the crime and dividing the criminals into bad and good by the governments which support the terrorist groups openly and secretly will make the terrorists more arrogant and impudent in committing such horrific crimes.

The Iraqi Foreign Ministry strongly condemned the terrorist bombing which took place in al-Rashideen area, western Aleppo, near the buses which are transporting locals from the towns of Kefraya and al-Fouaa, affirming that targeting civilians reflects the obnoxious crimes of the terrorist groups in Syria.

In a statement published by al-Sumaria News Website on Sunday, the Ministry said “We express condemnation and denunciation of the criminal terrorist act which targeted the innocent civilians who were evacuated from al-Fouaa and Kefraya,” affirming that Iraq stands by the brotherly people of Syria.

The Ministry called upon the international community to show more seriousness in solving the crisis in Syria through peaceful means away from the attempts of some countries to build their political interests on the suffering and pains of the Syrian people.

That Ministry indicated in its statement that targeting civilians directly reflects that “ugliness” of the approach adopted by the armed terrorist groups in Syria who are very far from the simplest humanitarian values, calling for “a real international stand to rein in and prosecute the terrorist groups.”

The Levant Scholars Union and the Ministry of Islamic Endowments “Awqaf” condemned in the strongest terms the obnoxious terrorist crime against the locals of al-Fouaa and Kefraya.

In a statement on Sunday the Union and the Ministry said that this heinous crime was committed by terrorists who are shedding the blood of all the Syrian people and who perpetrated the acts of killing and sabotage in all areas across the homeland.

The statement affirmed that religion is very far from the unethical and inhumane acts of the terrorists. 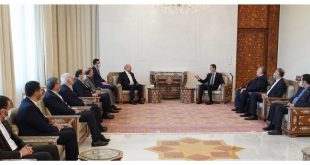