Soussan: Lies circulated by the US administration and conspiring countries on Syria aim to escalate situation, foil efforts of finding solution 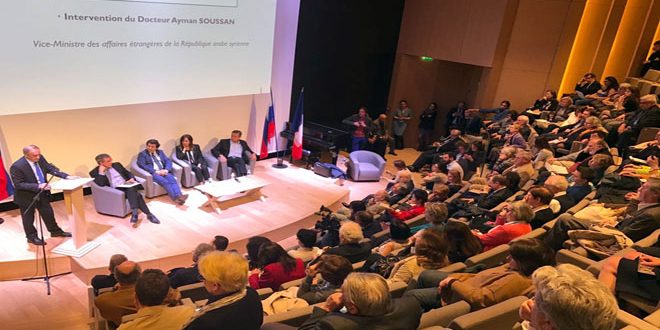 Paris, Brussels,SANA- Assistant Foreign and Expatriates Minister Ayman Sousan said that the interference of some regional and international powers in Syria’s affairs is behind the terrorist aggression that Syria is exposed to and that it is a flagrant violation of the international law and the principles the UN Charter.

“The lies and allegations which were circulated by the US administration and the conspiring countries on Syria are no more than pretexts to escalate the situation and thwart the efforts to find a solution for the current crisis in Syria.” Sousan said during a seminar held in Paris at the initiative of the French MPs Thierry Mariani and Nicolas Dhuicq.

He warned against the dangers of terrorism that threatens the whole world and peoples.

In turn, the French deputies affirmed their complete solidarity with Syria in the face of Takfirist terrorism, saying that Syria defends the entire world by fighting terrorism.

They hoped that the upcoming presidential elections will constitute an introduction to a new French approach with regard to the situation in Syria, in a way that serves security and stability in the world and the French interests.

They called for lifting the unilateral economic sanctions imposed on Syria and condemned the destructive policy of the Justice and Development Party in Turkey which threatens the region and Europe.

The French MPs also highly appreciated Russia’s stances towards the situation in Syria, underlining the need to establish a new world system that puts an end to the hegemony approach and respects the sovereignty of states.

In the same context,   Sousan refuted the allegations circulated by the US, affirming Syria’s adherence to its international commitments and respect to the requirements of joining the Nuclear Non-Proliferation Treaty “NPT”.

Meeting members of the Syrian Peace Process Support Group of the European Parliament in Brussels, Sousan indicated that the US and its tools should blame the states which supplied the terrorist groups with the chemical weapon.

He stressed Syria’s readiness to cooperate with the truthful countries in the fight against terrorism, on the basis of its belief that terrorism, which has no borders or religion, seriously threatens regional and international peace and stability .

“The Syrian people are now determined more than ever to eradicate terrorism, achieve victory and preserve the unity of Syria,” he said.

For their part, the members of the group affirmed their solidarity with Syria against Takfiri terrorism and their determination to do everything to unveil the reality of what is happening in Syria and  put pressure on the governments of the EU countries to adopt a new policy that helps Syria’s efforts to combat  terrorism.