Putin: US violated international law by launching an aggression on a sovereign state 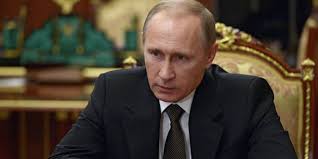 Moscow, SANA- Russian President Vladimir Putin stressed that the US violated the international law by launching an airstrike on a Syrian military airfield without providing any evidence of the use of chemical weapons by the Damascus government.

President Putin was quoted by TASS in an interview with the Mir 24 TV channel as saying “How did NATO allies reacted? They have all been nodding like bobbleheads, without analyzing the events,” wondering “Where is evidence of chemical weapons use by Syrian troops? There is none.”

Putin continued “Was there a breach of the international law? Yes, there was. This is an evident fact. Without an approval by the UN Security Council, an airstrike is carried out on a sovereign country. And, despite it being a clear violation of the international law, everyone agrees to it, accepts it and starts nodding (in approval) and expressing their support.”

Putin: US violated international law after its aggression on a sovereign state 2017-04-12
ruaa-jazaeri
Share
Previous Chinese President affirms in telephone call with Trump that solving crisis in Syria should be through political means
Next Soussan: Lies circulated by the US administration and conspiring countries on Syria aim to escalate situation, foil efforts of finding solution