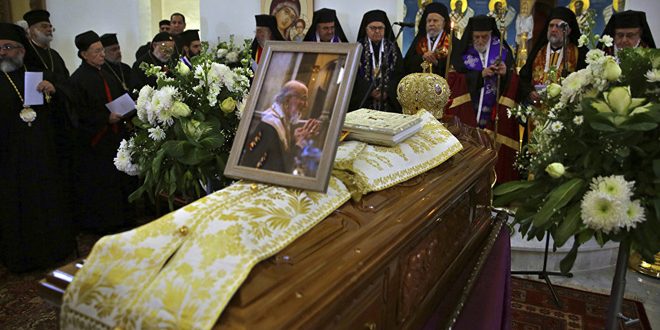 Beirut, SANA- Delegated by President Bashar al-Assad, Syria’s Ambassador in Beirut Ali Abdul-Kareem participated in the funeral of Patriarch Hilarion Cappucci of Jerusalem which was held in the Cathedral of Our Lady of Annunciation in Beirut, headed by Melkite Greek Catholic Patriarch of Antioch and All the East Gregorios III Laham.

In a speech delivered during the Eternal Rest Prayer, Patriarch Laham said that the late patriarch defended the Palestinian cause until his last breath and always declared his desire to return to Palestine to be close to its people and share their pain and suffering.

He added that the struggle and the sacrifices of the late patriarch for Palestine, his homeland Syria and the Arab world is a source of pride for the Melkite Greek Catholic Church.

Following the funeral ceremony, the body of late Patriarch was carried to the Aleppo Basilian Order Monastery in Serba where he was laid to rest.

Last week, Patriarch Hilarion Cappucci passed away at the age of 94 in the Italian Capital of Rome.