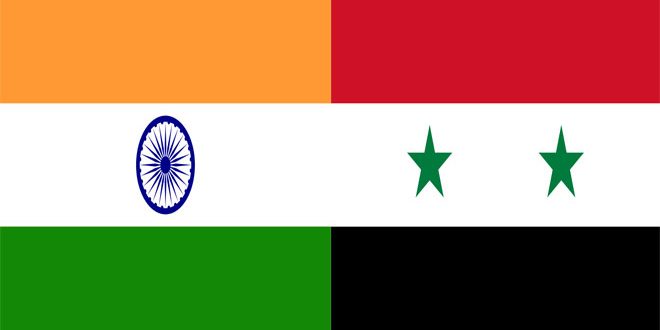 Damascus, SANA-Public Works and Housing Minister Hussein Arnous discussed on Wednesday with Chargé d’affaires of Indian Embassy in Damascus Sita Ram Meena the means to develop cooperation relations between Syria and India in the ministry’s work.

The minister expressed pride in the friendship which binds the Syrian and Indian people and the importance of enhancing cooperation with the Indian companies specialized in production and manufacturing engineering vehicles.

He pointed out that Syria will participate soon in the 3rd Asia Pacific Ministerial Conference on Housing and Urban Development (APMCHUD) which will be held in the Indian capital New Delhi between December 14-16 with the participation of 68 countries.

For his part, Meena pointed out the importance of developing cooperation between India and Syria, noting that many Indian companies interested in housing and construction participated in the reconstruction exhibition which was held in September 2016 in Syria.

For his part, Suhil Abdullatif, Director General of the General Establishment for Housing, expressed the establishment’s readiness to cooperate with Indian companies, including ‘Raubex Group’ which wants to build 25000 housing units in Syria.