The army restores security to several neighborhoods in Aleppo city 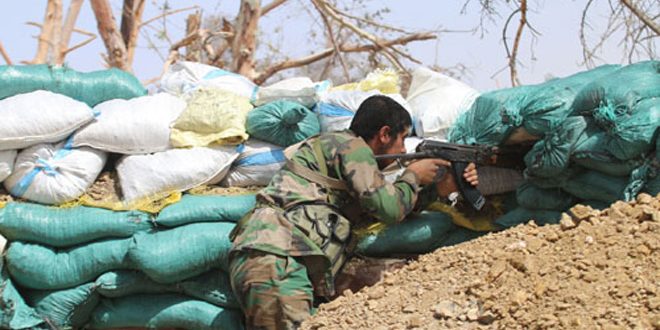 Provinces, SANA- The army is advancing further in Aleppo, as its units, in cooperation with the supporting forces, have established control over several new areas after inflicting heavy losses upon the terrorist organizations there.

Units of the Army and Armed Forces, in cooperation with the supporting forces, restored security and stability to the neighborhoods of Karm al-Dada, Karm al-Qatirji and al-Shaar in the city of Aleppo, SANA reporter announced.

In a relevant context, the reporter said members of the Internal Security Forces detonated a car bomb for the terrorist organizations before it managed to reach a military post in the surroundings of Jamiyet al-Zahra.

He noted that the car bomb attack was planned in an attempt to raise the deteriorating morale of the terrorists who had to flee under the army’s strikes in the eastern neighborhoods of Aleppo city.

Later, a military source said that army units restored security and stability to al-Marjeh and al-Sheikh Lutfi neighborhoods in Aleppo, and are pursuing the remaining terrorists in the area.

The source also said that the army units established control over Tallet al-Shurta (hill) after conducting intensive operations against the terrorist organizations to the east of Aleppo city and eliminating their gatherings.

Units of the army, in cooperation with backing forces, advanced in Housh al-Zawahra farms in Damascus countryside, stormed the defensive lines of the terrorists groups and destroyed their fortifications.

The army killed a number of “Jaish al-Fatah” terrorists in military operations against their gatherings in several towns of Hama and Idleb countryside.

The army’s air force raided the gatherings of terrorists in Kfar Zeita, Latamneh, Hilfaya and Soran in Hama northern countryside, killing a number of the terrorists and destroying their dens.

Units of the army also hit the gatherings of terrorists in Tamana’a, Sarmin, Khan Sheikhoun and Binish in Idleb countryside, killing several terrorists and destroying a number of armored vehicles.

Army units killed a number of Jabhat al-Nusra terrorists in operations against their gatherings and fortifications in Daraa al-Balad area and al-Nu’aimeh in the countryside of Daraa southern province.

The military source told SANA that an army unit on Tuesday clashed with a terrorist group which attacked a military post to the north of the Technical Institute in the southwestern part of al-Manshyia neighborhood in Daraa al-Balad area.

The source stressed that the clashes ending by foiling the attack and killing all members of the terrorist group, in addition to destroying an amount of arms and ammunition that was in their possession.

The source added that an army unit carried out precise bombardments against fortifications of the terrorist groups in the surroundings of the shoes factory and Katakit building in Daraa al-Balad area, killing a number of terrorists and injuring others.

5km to the east of Daraa City, an army unit killed a number of terrorists and destroyed their fortifications in al-Nu’aimeh town.

A military source told SANA that army units carried out concentrated strikes which resulted in killing many terrorists in the villages of al-Tibah al-Gharbiya, al-Ghanto, Kisin, and al-Samalil, in addition to destroying a 23mm artillery gun in Um Sharshoh and a car loaded with munitions in Tal Abu al-Sanasil in the northern countryside of Homs.

The source added that an army unit thwarted a terrorist group’s attempt to infiltrate from the direction of Hosh al-Zabadi village towards Tasnin village in al-Rastan area, leaving most of the terrorists dead or injured.