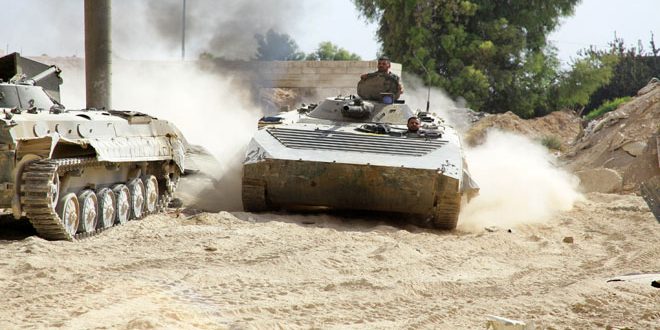 Provinces, SANA -A military source announced on Sunday the restoration of security and stability to new areas in the eastern side of Aleppo city after eliminating a number of terrorists and destroying their dens.

The source said, in a statement to SANA, that army units, in cooperation with supporting forces, restored control over the neighborhoods of Karm al-Miasar, Karm al-Tahhan, Qadi Askar roundabout and al-Haooz roundabout in the eastern neighborhoods of Aleppo city.

The source added that the army’s engineering units have set off to dismantle mines and explosive devices that were planted earlier by terrorists in streets and squares.

The source also confirmed that an army unit eliminated the last terrorists’ gatherings in the Eye Hospital in Qadi Askar neighborhood which terrorists turned to a site to plan their criminal acts.

Earlier, army units, in cooperation with supporting forces, restored stability and security to al-Jazmati Roundabout and al-Halwania Roundabout reaching to Hanano road  in the eastern neighborhoods of Aleppo.

A military source said that the army units continued advance in the city eastern neighborhoods and chased the fleeing terrorists in the area.

According to the source, terrorists’ fortified positions were destroyed and heavy losses were inflicted upon them  in the personnel and equipment.

An army unit  directed intensified strikes against two command centers of the armed terrorist groups in the neighborhoods of al-Sad (Dam)road and al-Arba’in area in Daraa al-Balad in Daraa Province.

A military source said that a number of self-claimed terrorist leaders were killed and their vehicles and equipment were destroyed.

The source added that all members of an armed terrorist group affiliated to Jabhat al-Nusra were killed on the road linking al-Nu’aimeh and Um al-Mayazen towns in the army artillery bombardment on the terrorist movements, about 5 km east of Daraa
city.

Another army unit targeted terrorist groups while they were demolishing locals’ properties to set up fortifications to the east of the Court’s building, to the northwest of Dar al-Moallymin, to the east of Busra Square in al-Nazihin Camp and to the south of al-Banin School in Daraa al-Balad.

An army unit destroyed 4 vehicles equipped with machineguns for ISIS terrorist organization in the area surrounding al-Mahr field in the eastern countryside of Homs.

In Homs northern countryside, the army units carried out concentrated operations against dens of Jabhat al-Nusra and ISIS terrorist organizations in the villages of Sama’alil, Tir Ma’ala near al-Houla and in the surroundings of Rastan, killing a number of the terrorists.

Syrian Air Force kills at least 50 terrorists from Jaish al-Fateh in al-Latamina, Kafr Zita, Zafr Nubul and Kafr Sajnah in the countryside of Idleb and Hama.