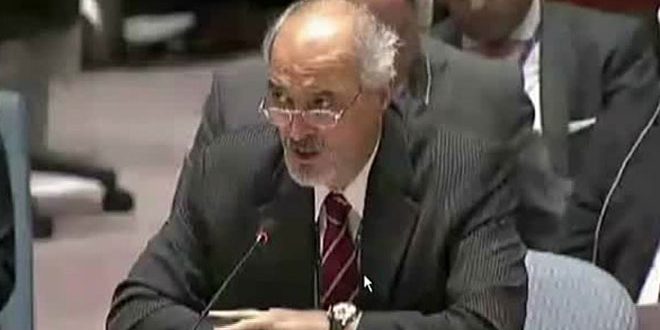 New York, SANA – Syria’s Permanent Representative at the UN Bashar al-Jaafari said on Tuesday that the UN report about children and armed conflicts didn’t deal with the main reason behind the suffering of children in Syria.

In a speech at a UN Security Council session on children during armed conflicts, al-Jaafari said that the suffering of the children is caused by the systematic insistence on spreading the rules of the extremist Wahhabi ideology which was established by Al Saud by adopting the deviant extremist Mohammad Ben Abdul Wahab who advocated acts of killing, massacring, invasion, abducting women, and slitting the bellies of pregnant women.

He pointed out to the heinous crime of slaughtering the Palestinian child Abdullah Issa perpetrated by an “opposition faction” that includes a group of thieves created in Turkey and belonging to Nour Eddin Zenki movement, which is a terrorist organization that applies the approach of the Wahhabi ideological perversion and receives financial and military support from Saudi Arabia, Qatar, the Turkish regime, and western countries, some of which are members at the Security Council.

Al-Jaafari highlighted that the Wahhabi regimes, which carried out a bloody project to eliminate the children in Syria and Iraq, have facilitated the extermination of children in al-Zara town in Hama countryside, children who were killed in cold blood by so-called “moderate militants,” adding that these regimes have also caused the drowning of the Syrian child Elan on a Turkish shore and the death of hundreds of children by the airplanes of the so-called international US-led coalition in Manbej city in Aleppo countryside.

Those regimes, he continued, are striving to ignite the “southern front” to reap more lives of innocent children and to alleviate the pressure on the terrorists of the north who collapsed before the Syrian Army and Armed Forces.

The MOC operations room in Amman which includes Arab, foreign, and Israeli intelligence agencies, is mobilizing between 7,000 to 9,000 gunmen in Jordan in preparation for unleashing this barbaric moderate opposition at the southern borders of Syria so that they can “practice their moderation” by killing children, destroying infrastructure, and attacking the Syrian army, al-Jaafari said, adding “what if this happened in another country? What would you call them, and how would you deal with them?”

He criticized the report as it ignored the suffering of the Syrian children in refugee camps in neighboring countries, expressing deep concern over the continued brutal practices against the Syrian children that include rape, human trafficking, recruitment, and human organ trafficking which take place in the refugee camps in Jordan, Turkey, and Lebanon, mainly in Nizip Refugee Camp in Gaziantep in Turkey.

Syria’s Representative pointed out to reports by the American New York Times and the Turkish BirGun newspapers which state that around 30 Syrian children were raped, forced to join terrorist groups, and forced to work all day long in textiles factories in Gaziantep, adding that there are around one million Syrian children living in Turkey, thousands of them working in factories and confectionaries shops and can’t read or write.

He also pointed out that two children died in al-Raqban camp in Jordan due to the poor conditions, lack of healthcare, and contaminated water which led to the death of 10-month-old child Fadia Khaled who contracted jaundice.

Al-Jaafari demanded an investigation into the fate of hundreds of Syrian children who were kidnapped by the so-called “Free Army,” al-Tawhid Legion, and Jaish al-Islam terrorist organizations in the countryside of Damascus, Aleppo, and Lattakia, noting that repeated appeals and messages were sent to the UN Security Council to find information about the fate of those children.

Al-Jaafari stressed that he supplied the office of UN Under Secretary-General for Children and Armed Conflict Leila Zerrougui with documents on cases of recruiting children by the so-called “Mufti of Ahrar al-Cham” terrorist organization, the Saudi Wahhabi terrorist Abdullah al-Muhesni, and on how Saudi terrorist Mohammad al-Oraifi calls upon the “moderate opposition” to slaughter and kill in secret without posting videos on the social networking websites in order to avoid “inciting the general Islamic public opinion in the West against them.”

Syria’s Representative indicated to the demand sent to the Under Secretary-General office to know the names of the six Syrian children which the report claimed were recruited in the popular defense groups, saying “until this moment, we haven’t received any information in this regard to be able to investigate it.”

He wondered why those who had prepared the report omitted any mention of the coercive economic measures imposed on the Syrian people and their children and the role of these measures in making the life of the children in Syria very difficult.

He referred to the suffering of the Syrian children in the occupied Syrian Golan due to the barbaric practices of the Israeli occupation, such as blockades, torture, and imposing the Israeli curricula on them, being killed by landmines planted by the occupation forces, and house arrest.

Al-Jaafari added that Zerrougui has recently shed light on a small part of the facts related to recruiting children by the ISIS, Jabhat al-Nusra, and other terrorist organizations in Syria and to killing and mutilating their bodies since more than five years.

Al-Jaafari also pointed out to the moral scandal of the UN Secretary-General hiding the facts mentioned in the report by the Under Secretary-General on documenting the crimes of alliance led by the Saudi regime against the Yemeni people and children, and that this scandal happened after the Saudi regime used political blackmail with its officials threatening to stop the financial aid provided to the UN programs and its specialized agencies, particularly the United Nations Relief and Works Agency for Palestine Refugees in the Near East (UNRWA).